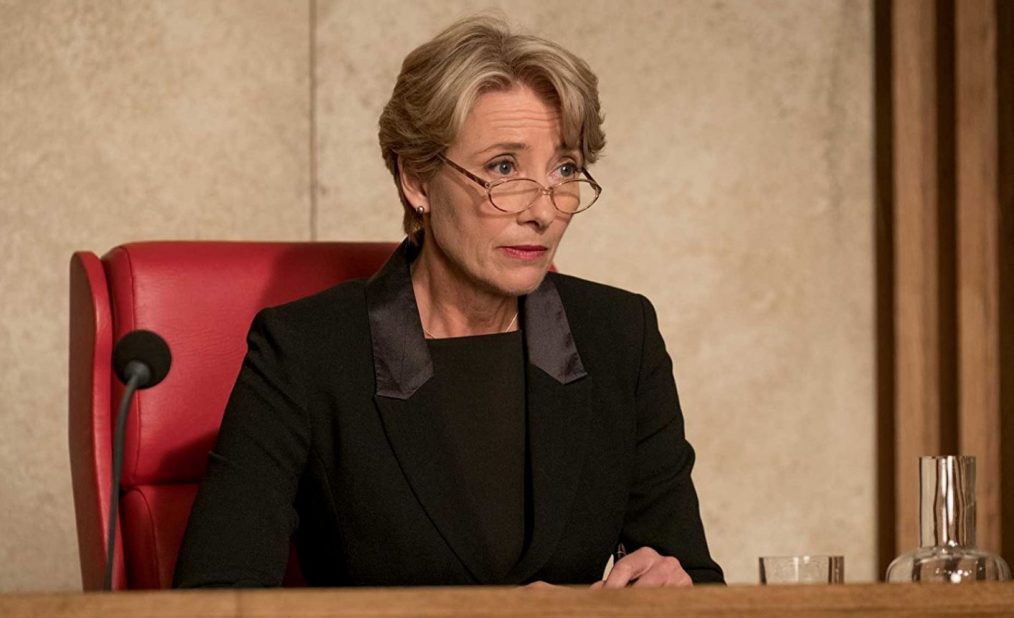 As a judge in the Family Division of the High Court, Fiona Maye (Emma Thompson) doesn’t have much time for herself, let alone for her husband Jack (Stanley Tucci).

He’d love a trip to the cinema or dinner with friends, but she’s always too busy, buried in the complex paperwork she needs to understand to make decisions about the lives – and deaths – of children.

With her job already putting unbearable pressure on her marriage, one particular case gets deeper under her skin than her necessarily dispassionate approach would usually allow; when she rules on whether a dying seventeen year old Jehovah’s Witness (Fionn Whitehead) should be forced to have a blood transfusion, her decision has consequences she could never have predicted.

There is much to admire about this film but most of it belongs on the sidelines of a disappointingly humdrum melodrama.

Dame Emma Thompson gives a confident, commanding and compassionate performance as Mrs Justice Maye, accepting the responsibility of making life and death decisions like a goddess. Stanley Tucci’s hapless husband is a sad presence in her shadow, happily deferring to his wife’s seniority – but only to a point. Jason Watkins as her assistant adds a touch of gentle but unforced humour to an otherwise heavy atmosphere.

The court scenes are intricate and enlightening – often thrilling, as she battles within herself, trying not to let any difficulties in her personal life influence her judgements.  The scenes involving Tucci’s matter-of-fact romantic overtures towards his wife are often heart-breaking.

But as the film trundles on, you soon realise that interesting as they are, this is not really a film about a High Court judge whose job threatens her marriage – it’s not a conflict between personal and professional, or at least not in the way you might think, or hope.

It’s not – in the traditional sense – the kind of film where within the first half hour, you know the goal of the protagonist, leaving many viewers wondering why they’re even bothering to watch the drama unfold.

It’s not until much later in the film that you finally realise where it’s going, and it’s a far less compelling destination than the set-up suggests.

The unexpected direction is initially of interest but as she has trouble shaking off the ghosts of a particular case, it becomes as irritating for the viewer as it is for her, leaving you wanting to find out what’s going on back home.

The Children Act is initially a fascinating character study, which explores some interesting territory before jumping on a train and heading in the wrong direction.