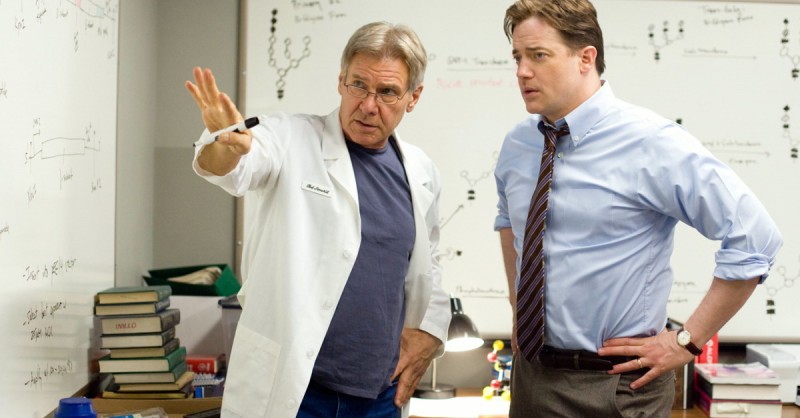 John Crowley (Brendan Fraser) is a high-powered executive at a Portland-based drug company.

He and his wife Aileen (Keri Russell) are running out of options to save the lives of two of their children, who have a condition called Pompe.

It’s an incurable, degenerative genetic disease, which confines the children to wheelchairs, allows them almost no physical freedoms, and usually claims the lives of sufferers before they reach their ninth birthday.

Determined to save his children, Crowley researches the disease and finds a maverick doctor, Robert Stonehill (Harrison Ford), in Nebraska, who’s been carrying out theoretical research that suggests that the advance of the condition can be halted.

Stonehill is one of those true mad scientists who lives in his own world, working to a soundtrack of 1970s rock music and relaxing alone at a local bar, with no company other than his beer.

Stonehill seems to be ignoring Crowley’s attempts to make contact, so the desperate father flies across the country to talk to him face to face.

Promising him funds he doesn’t have, Crowley persuades Stonehill to concentrate on developing a cure. Crowley quits his job and sets about securing the financial backing Stonehill needs to save the children.

Against the odds and the clock, the pair struggle against nature and the dispassionate bureaucracy of the pharmaceutical industry to save Crowley’s children and the thousands like them across the world, forgotten – until now – by medical science.

This is the remarkable true – or truish – story of a father who was prepared to give up everything and risk all he had worked for to save his children.

Most people would have quit long ago, but with his contacts, experience, determination and resilience, John Crowley just won’t give up.

Basing a story on real events can seem like a cinematic straight-jacket, forcing the film-makers to take a path which isn’t necessarily the most dramatic – or to make the film more exciting, some facts might have to be tweaked.

Of course, for cinematic reasons, Crowley’s children are older than they were in real life, to give them enough of a personality for us to identify with them more. And was the real-life Stonehill really such an archetypal Hollywood mad scientist, the kind that no-one would try to associate with, unless their children’s lives depended on him?

The idea of a father showing initiative, determined to save his children’s lives at any cost presents us with a heart-warming tale of bravery – and at times, you feel pig-headed stupidity. But there are a few key problems that the film-makers can’t necessarily do much about.

What’s Pompe Disease? Few regular cinema-goers will have heard of it, either before or after this theatrical release. You don’t really need to know what it is, or which enzymes will help to destroy it. It serves as little more than a MacGuffin to drive the plot. But that being the case, a fictitious film about a cure for cancer, or another such more familiar condition – which affects millions of people rather than a few thousand – might grab the audience more. Would an audience prefer a film that they can’t really relate to to be “inspired by true events” or a fictitious film that chimes more with their own experiences?

Also – this isn’t quite clear whether it’s more interested in Crowley’s relationship with his family or the bureaucracy of the money-men who seem to be trying to scupper his attempts to rid the world of this condition.

We’re more used to seeing Brendan Fraser and Harrison Ford running around being action heroes, but here, the only running is down corridors in office buildings and laboratory complexes and the most action we get is a bunch of men in lab coats shouting at each other, as they stare into petri dishes or thumb through data, neither of which makes for a particularly spectacular visual experience.

They do wheel in a handful of Pompe sufferers to tug on the heart strings, but the film never becomes truly emotionally engaging.

The bad guys are the money men – chief among them, Jared Harris gives us a typically creepy turn – but ultimately, it’s the money that produces the drugs that save the world, so is it fair to malign them for trying to make a living?

Perhaps most troubling element for me is the title. For a man with clout in the pharmaceutical industry to set up a charity to pay for research to develop a drug that will save children with a rare genetic condition, it actually seems to be the exactly the kind of measures you’d expect him to take. Perhaps what is extraordinary is that it takes until someone in his position has a child with such a condition before anyone sets out to find a cure.