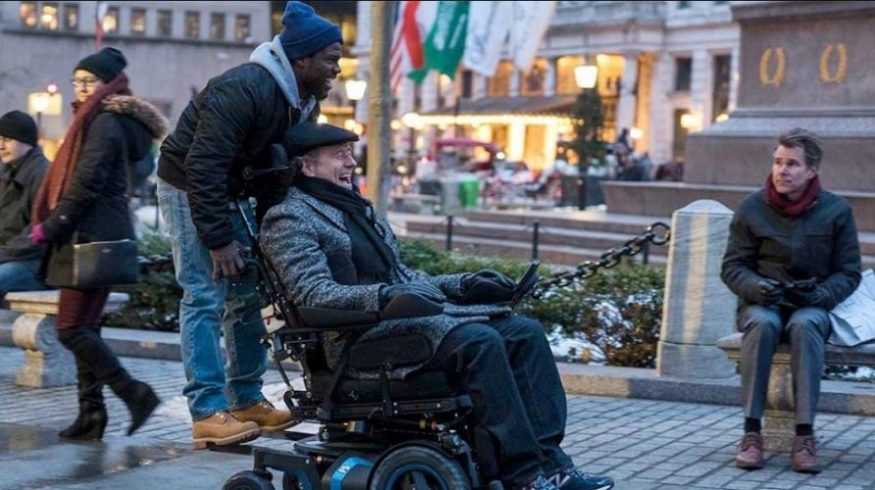 Selfish small-time crook Dell (Kevin Hart) has to prove to his parole officer that he’s looking for work otherwise he risks – among other things – losing access to his son.

Seeing that there are interviews going on for a job in a plush apartment building, he pops inside to get a signature and carry on with his day.

But Phillip (Bryan Cranston), the multi-millionaire quadriplegic businessman who’s looking for a full-time carer, is feeling a little rebellious – and to rile his personal assistant Yvonne (Nicole Kidman) and perhaps to liven up his life a little, rather than offering Dell a signature, he offers him the job.

Dell has no qualifications, appropriate experience – or indeed desire – but it’s take the job – and its unexpectedly comfortable salary – or no signature and back to square one.

There’s a lot of learning for Dell to do – both for the job and, of course, life more generally. Similarly, the unlikely friendship that grows between the two men is a learning experience for Phillip too.

But their relationship is not without its challenges – and Yvonne is not going to stand by a see Phillip when things start to turn sour.

This remake of the 2012 French Golden-Globe and BAFTA nominated drama Untouchable, is a warm and surprisingly light-hearted film about the unlikely friendship – such as it is – between an ex-con dead-end Dad and a quadriplegic businessman.

Bryan Cranston is particularly impressive, acting the rest of the cast off the screen with only his head, although his motivation for hiring Dell is a little unclear, since most people might be expected to put their own comfort ahead of a little fun or trying to wind someone else up. A sour-faced Nicole Kidman is a little underused as his prim-and-proper sidekick, not that the character requires much more than she delivers.

Kevin Hart is a little harder to assess – he’s meant to be an irritant to everyone on screen except Phillip – and at times to Phillip too. But for this film to work, the audience has to want this job – and the resulting friendship – to work out – and see both men grow emotionally as a result. In reality, though, Dell is as annoying to us as he is to most of the other characters – rather than being a loveable rogue, as intended, he’s more of a selfish, arrogant and largely humourless rogue, with less of the charm of his counterpart in the original film.

But Dell does go on the intended journey and spending time with Phillip does humble him, while his own no-nonsense attitude rubs off a little on his boss.

Outside the constraints of the narrative – known to anyone who’s seen the original film and somewhat formulaic for anyone else – The Upside has some interesting things to say about a variety of subjects, from responsibility and fatherhood to modern art.

But too much of the storytelling feels a little convenient or contrived and Dell’s comparative lack of charm leaves this remake packing less of an emotional punch than the original.