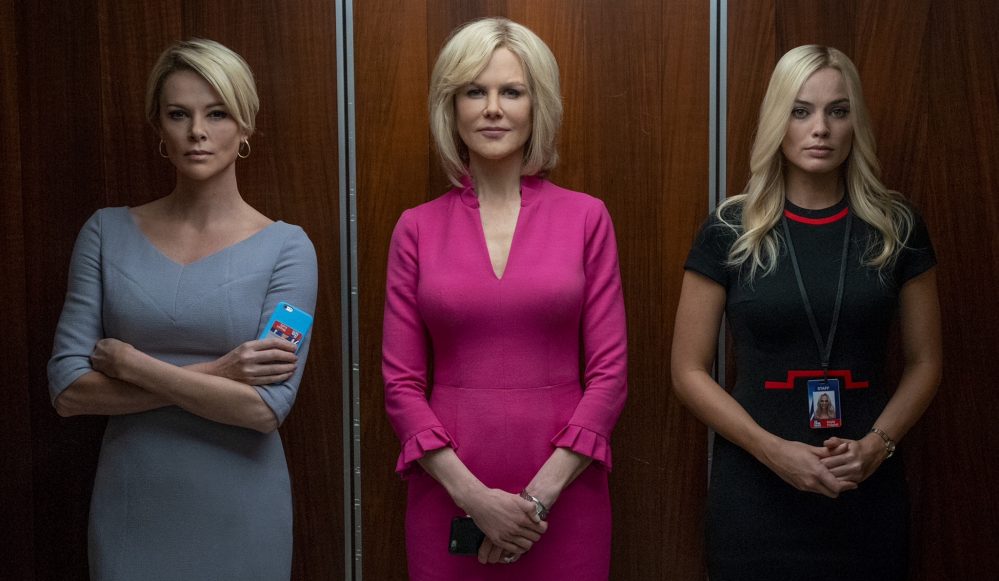 One of the network’s top anchors, Megyn Kelly (Charlize Theron), has been shaking the Right by giving one of the candidates, Donald Trump, a tough time at a live TV debate, but the head of Fox News, Roger Ailes (John Lithgow) gives her his full backing.

Their relationship hasn’t always been this supportive.

When another senior presenter, Gretchen Carlson (Nicole Kidman) is sacked for taking a liberal view on gun control during her news programme, she launches legal action against Ailes for sexual harassment.

As the network tries to drum up public support from all its female hosts, there’s a deafening silence from Kelly.

But when she realises that she wasn’t the only one to have been sexually harassed by Ailes as a younger women, Kelly becomes one of the loudest voices against her boss.

Ailes famously became the first media giant to be toppled by allegations of impropriety, even before the explosion of the Weinstein scandal.

”TV is a visual medium!” Ailes would shout when young women, prepared to do almost anything for their big break in TV news, would question his order during one-to-one meetings to stand up, spin around and lift up their dress to expose more leg.

The women would then keep quiet about how their careers suddenly took off.

For decades, this was common practice, as a bullying boss hid his behaviour behind making stars of dozens of bright young women and making millions for the network’s owners.

But all it took was for one powerful woman to break ranks after she was sacked – and one of the most influential media moguls in the US was knocked off his perch.

It’s a powerful and important story, but despite four strong central performances – portraying the three women at its heart and the man who made their careers – and despite some engaging directorial flourishes – such as voice-overs, talking to camera and captions to help out those of us not familiar with the characters – the drama feels oddly flat.

While the treatment of these women is inexcusable, the allegations leveled at Ailes aren’t of the gravity of those that Harvey Weinstein is currently facing in a New York courtroom – and apart from a shocking scene involving Margot Robbie’s up-and-coming reporter – a composite character, we see little of the inappropriate behaviour ourselves – mostly it comes as a flashback or an expositional comment. I’m not saying that we need to see two hours of sexual harassment on screen, but two hours of – largely – women talking to lawyers and debating within themselves doesn’t make for compelling drama. We don’t see women suffering as a result of the harassment. We see one woman who takes it on the chin and others who’ve prospered as a result of abuse, only now prepared to speak up, after the harassment is many years behind them.

We hear about over twenty complainants – but hear directly from only two.

We see an old bully who knows how to get people watching news – sexy women in short skirts, sitting at glass, open-fronted desks, spouting off populist views. We also see a supportive boss who backs his journalists to the hilt when they’re criticised by the establishment Right – including the soon-to-be president Donald Trump. But we only get a glimpse of the behaviour for which history will ultimately remember this seminal journalist and media mogul.

There are interesting similarities with the Weinstein case – an overweight, bad tempered, bullying, leering, powerful tycoon who intimidates (and promotes) women before resorting to a zimmer frame when his methods are exposed. But while Weinstein is accused of raping women in hotel rooms, the biggest allegation against Ailes seems to be trying to kiss a woman in his office and then treating her perfectly properly for the ten years after she refuses. And even though he was never charged with any crime – and was indeed given a large pay-off when he resigned – that’s obviously not to say that even this is remotely acceptable, but it’s a sign that we don’t see women whose careers have been dashed and whose lives have been crushed.

With attractive young women still being favoured by TV networks around the world, it’s quite possible that male bosses who promote women who play along with their sexual fantasies are still not uncommon and perhaps Ailes was just unlucky that Gretchen Carlson decided not to take her sacking sitting down. But his downfall had nothing like the affect on wider society as the #MeToo stories that emerged the following year, as a result of the Weinstein scandal. Perhaps that inevitable film will do more to shake up those who still think there’s not really a problem out there.