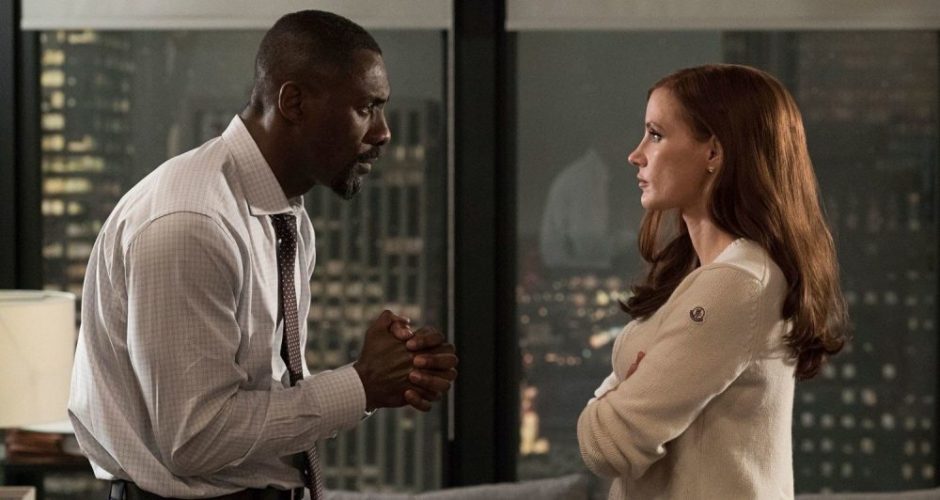 An accident on the slopes ends the skiing career of Olympic hopeful Molly Bloom (Jessica Chastain) and she ends up working in an LA bar, frequented by celebrities.

Impressed by her sharp tongue, one of them, Dean Keith (Jeremy Strong) hires her as his personal assistant and soon trusts her to run his high-stakes poker game.

After a fall-out between the pair, Molly breaks away and sets up her own game, taking most of the wealthy players with her, including a well-known – but unnamed – film star (Michael Cera).

But the authorities soon get wind of the game; believing that criminals are laundering money through her table, they detain her and try to get her to give up names but she’s determined to protect her clients, even if it means going down herself.

Even her own lawyer (Idris Elba) has trouble persuading her to save herself, when she would rather save her reputation.

This is the first time the Oscar-winning writer Aaron Sorkin has turned his hand to directing a feature and based on this, he should probably think about staying in the writer’s chair in future.

The screenplay – as you’d expect – dances along briskly as it fizzes with dizzying dialogue that delights the ears but the narrative never quite holds together, not least the central pairing feels contrived. It’s far too long for what it’s trying to do and being told through a flash-back-heavy structure renders the story somewhat formulaic.

One problem that Sorkin can’t be blamed for – other than for having chosen to adapt the real Molly Bloom’s book in the first place – is that there aren’t really any characters on screen that you’d want to root for, except perhaps Idris Elba’s lawyer – and if you’re on his side, the question is why he’d be wasting his time on this woman in the first place. Bloom herself is a cocky know-it-all who’s clearly facilitating, at best, alcoholic gamblers who can’t help but destroy their lives and at worst, criminals trying to launder their ill-gotten gains.

Coming so soon after Miss Sloane, it felt a bit like a sequel – with another fast-talking Jessica Chastain once again taking drugs to keep awake as she does her slightly dodgy business on just the wrong side of the law. And this sequel isn’t as good as its putative predecessor, so it feels, consequently, less original. Not least, the stakes are harder to get behind – rather than turning her skilfully barbed words against America’s powerful gun-lobby, she’s fighting for the right of gangsters to escape the law.

That said, it could perhaps be argued that encouraging criminals to destroy each other at the poker-table rather than on the streets might be laudable.