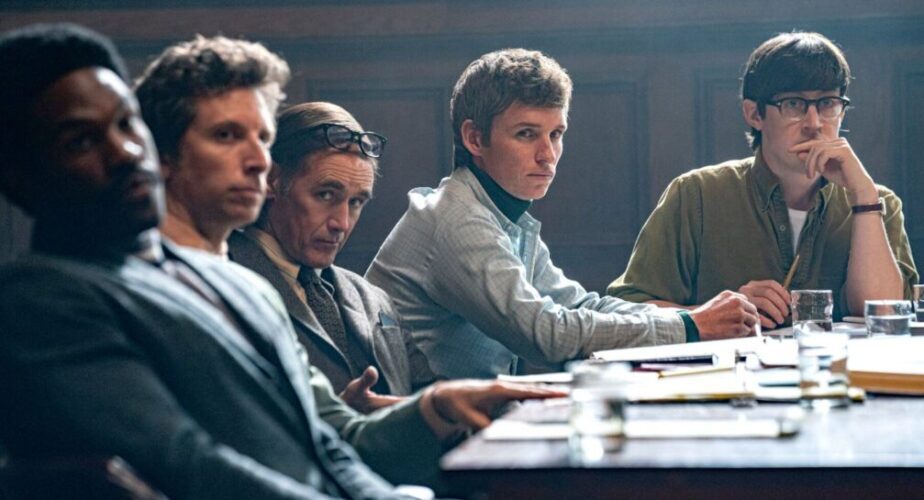 In the run-up to America’s 1968 presidential election, an anti-Vietnam War demonstration outside the Democratic Party Convention in Chicago got violent.

A handful of the ring-leaders of the demonstration were rounded up by the authorities and put on trial, charged with conspiring to incite riots.

They came from disparate groups, who’d never met each other before, let alone planned the violence, but that didn’t seem to bother the new Attorney General (John Doman) or the judge (Frank Langella).

The chief defence lawyer William Kunstler (Mark Rylance) has his work cut out to convince the jury that the case against the Chicago 7 is politically motivated.

Coming from the pen of The West Wing’s Aaron Sorkin, it’s not surprising that The Trial of the Chicago 7 is a loquacious but eloquent, politically liberal polemic – although it’s not quite clear what the target of the polemic is.

On the surface, it feels a bit like it should be an anti-war film, but we don’t hear many anti-war arguments. By the time the trial starts, the purpose of the initial demonstration is largely immaterial.

It’s also a film about miscarriage of justice, but not so much that you’ll be screaming at the screen. Apart from the judge being a small-c conservative, as many in the judiciary are, the defendants were to varying degrees involved in the violence, even if they didn’t start it, which makes it more an argument about how involved they were, rather than whether they were involved at all. And many of the arguments are more about process than facts.

In truth, it feels more like Sorkin is taking the opportunity to take a pop at a reviled, vindictive and discredited Republican administration, in the run-up to a presidential election.

That said, his mellifluous dialogue – in the mouths of some fine actors – makes this courtroom drama a feast for the ears and after a more workmanlike directorial debut in Molly’s Game, Sorkin’s structure this time around makes his own screenplay flow even better; building the narrative around the courtroom antics, flash-backs to the events in question and a stand-up routine by the hippy leader Abbie Hoffman, the plot bounces around deftly, livening up what could otherwise feel like a handful of earnest men talking to – or at – each other.

It’s perhaps unexpected that the most likeable characters are the lawyers – both the prosecution and the defence; Joseph Gordon-Levitt and Mark Rylance are the only unblemished and honourable people on screen. As a pair, they’re the only ones you really trust to uphold justice.

It’s a highly polished production but it’s more of an intellectual exercise than an emotionally rewarding, drama, with history catching up only in a series of captions, as the closing credits approach.