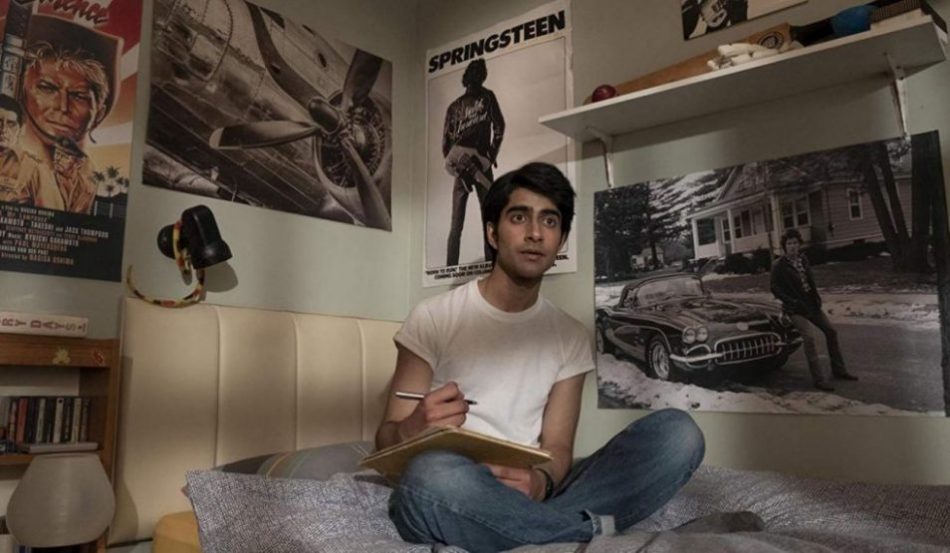 In late 1980s Luton, student Javed (Viveik Kalra) is struggling to navigate his way through his teenage years, squeezed between the expectations of his traditional Pakistani family on the one side and the racism of his neighbours on the other.

The only person who makes him feel grounded in his community is his long-time best friend Matt (Dean-Charles Chapman), but as they grow older,  Matt’s success with the girls and dedication to his New Romantic pop group are pushing the pair gently apart.

When Javed’s proud father loses his job, the responsibility falls on his mother to expand her dress-making business to support the family and Javed comes under pressure to contribute, but having trouble finding work himself, he sets his heart on a writing career, despite a crippling lack of self-confidence and blatant opposition from his father.

But when another friend introduces him to The Boss, the lyrics of Bruce Springsteen’s blue-collar rock anthems speak to him and a new English teacher (Hayley Atwell) and politically charged girlfriend (Nell Williams) complete the package to inspire him to make something of himself.

There’s a lot of heart in this warm and uplifting film, as Gurinder Chadha tries to do for working class rock what her earlier hit Bend it Like Beckham did for football – except that this is not a film about an aspiring singer, although – it could be said that he’s an aspiring lyricist.

Javed is a generally likeable protagonist but his angst-filled life doesn’t particularly feel any more difficult than most other teenagers’ might have been in a working class community during the late Thatcher years.

The plot is surprisingly formulaic, not least for a film based on a non-fiction book – Javed is the screen version of the co-writer of the film and the author of the book it’s based on, Greetings from Bury Park: Race, Religion and Rock ‘n’ Roll, writer Sarfraz Manzoor’s memoir of growing up in Luton as the son of Pakistani immigrants, with a penchant for Bruce Springsteen’s music.

Music forms the skeleton around which the narrative is woven, but unlike some of the other recent films built on music – Bohemian Rhapsody, Rocketman and Yesterday, for example – the music here is not exclusively by the artist at its core; there’s plenty of other 1980s music, but largely in an effort to highlight how bland most of the music of the time really was.

And unlike those other films, bursting to the seams with endless, timeless classics, that could easily form the back-drop to any of our lives, you don’t really come away with the sense that Bruce Springsteen is a musician who’s changed the world – America, perhaps – Sarfraz Manzoor, unquestionably – but most working class British teenagers would be unlikely to find themselves dancing in the streets, experiencing an epiphany, at the lyrics to a couple of big hits and a handful of songs that will be known only by die-hard fans. In fact, so few are the tracks at its heart that some have to be used more than once.

Chadha has a good go at trying to impress upon the audience the gravitas of these tracks – not least having scenes in which the lyrics fly around the screen like a master painter’s brush-strokes, but however passionate and heartfelt, songs such as Born in the USA simply won’t get under the skin of as many people as the works of Queen, Elton John and The Beatles.

The problem is that viewed in that light, the bitter-sweet drama is a little predictable and often arch, with too much box-ticking and several convenient characters who exist simply to make a point or nudge the plot forward.

But films are formulaic for a reason – the formula works – and as you feel the film building to exactly the kind of catharsis that Richard Curtis and Danny Boyle delivered only recently when Jack Malik address the crowd at Wembley Stadium in Yesterday – sure enough that’s exactly what’s delivered…a speech about how important it is to be yourself, but without forgetting about your roots.

Tugging at all the right heart-strings, it’ll bring a frog to the throat, if not a tear to the eye – but the message is as obvious as the film and as blunt as its efforts to use Springsteen’s music to make its points.

Fantasy elements certainly lift the film visually – Luton isn’t the most cinematic location, after all – and there are a handful of meaningful moments. Kulvinder Ghir as Javed’s father is one of the most fascinating characters, urging his son one minute to “avoid the women and follow the Jews” when he wants him to do well in school, but moaning, the next, that he’s obsessed with the Jewish American singer – despite repeatedly being corrected that Springsteen is not Jewish.

A handful of entertaining cameos seem to miss the mark – Marcus Brigstocke, Rob Brydon and Sally Philips detract from the narrative, rather than draw you into it, because they’re so striking that they take you away from the story while they’re on screen.

And given that the film doesn’t take its title directly from the book, you wonder why it doesn’t use a more potent song-title, more associated – among mainstream audiences – with the Boss, rather than Manfred Mann’s Earth Band. Another lesson, perhaps, that could have been learned from Bohemian Rhapsody, Rocketman and Yesterday.