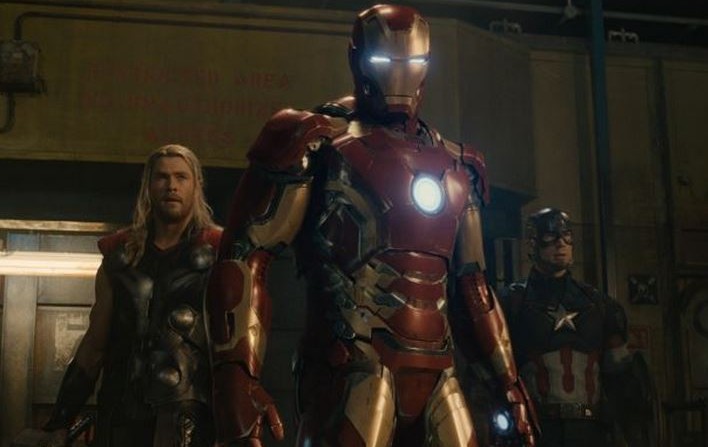 The Avengers – the band of super-heroes we last met as a team three years ago – are back together, in the eastern European state of Sokovia, where a mad scientist has been experimenting on humans, using an unearthly sceptre.

Two of the products of this experiment, the Maximoff twins (Aaron Taylor-Johnson and Elizabeth Olsen), have their own agenda, to avenge the death of their parents in an attack by a bomb made by Stark Industries – the same Stark (Robert Downey Jr) as the geeky billionaire inside the Iron Man suit, for the uninitiated. The experiments have given Pietro superhuman speed while Wanda has developed the power to give people living nightmares.

Back at Avengers HQ, Stark is trying to persuade Bruce Banner (Mark Ruffalo) of the merits of kickstarting a peace-keeping programme that involves creating an artificial-intelligence being; the plan backfires when Ultron (voiced by James Spader) decides, with his AI wisdom, that the best way to have peace on earth is to eliminate all humans.

The Avengers have to assemble once again to save the world by destroying Ultron, who’s enlisted the help of the Maximoff twins, as well as an army of robots he’s created in his image.

Travelling as far and wide as New York and Seoul, allegiances shift as the battle for the survival of humanity is joined by a team with such super powers as having a strong shield (Chris Evans’ Captain America), being good at martial arts (Scarlett Johansson’s Black Widow), having a good aim with a bow-and-arrow (Jeremy Renner’s Hawkeye), being worthy enough to be able to lift up a big hammer (Chris Hemsworth’s Thor) and turning into an ferocious green giant when angered (Mark Ruffalo’s Hulk).

When comics – and now cinemas – are full of superheroes, we’re used to seeing people who can fly, become invisible, stretch their bodies and so on – so this bunch of big-budget crime-fighters, with powers that are little more than being good at sports or having useful toys, almost feels like it’s verging on Mystery Men.

But after decades of success, from page to screen, Marvel’s Avengers draw a cohort of fans who love the characters, know their back-stories and accept their interactions in a way that makes a film like this critic-proof.

On the one hand, to newcomers, the plot is almost impenetrable, but enthusiasts will already know about the power of Loki’s sceptre and will just be able to enjoy the ride, without having to put the puzzle together first.

But whether it’s an intricate – or overly complex – puzzle or a bumpy and noisy ride, only the most churlish of reviewers could criticise the scale of its sets, action sequences, special effects and sheer chutzpah.

A film that features a man in a giant Iron Man suit, throwing the enormous Hulk around in a sea of sky-scrapers can’t be anything other than spectacular – and if you’re wondering why two of the Avengers are fighting each other, the story is probably not going to be the main draw for you.

It will help to have seen previous films in the ever-expanding Marvel Cinematic Universe, which, on the one hand seems somewhat cheeky on behalf of the producers, but on the other, creates a club that draws in an increasing number of members as the franchises within the universe continue to unroll.

Avengers: Age of Ultron is big and noisy and will shake the cinema like no other film before it. And while it’s darker than the previous Avengers outing, it’s laced with enough wry one-liners to add an extra dimension of mindless entertainment. But some of the team do tend to take themselves a little too seriously, although Thor is particularly entertaining in that unlike his comrades, he has no everyday person character to hide behind – he’s superhero to the core.

At times, the director Joss Whedon tries to take a break from the action to develop the characters – he even attempts to give us a rather clunky intra-hero romance – but with a plot as nonsensical as this, all you really want to do is sit back and enjoy the ride – it’s about experience, not emotion.