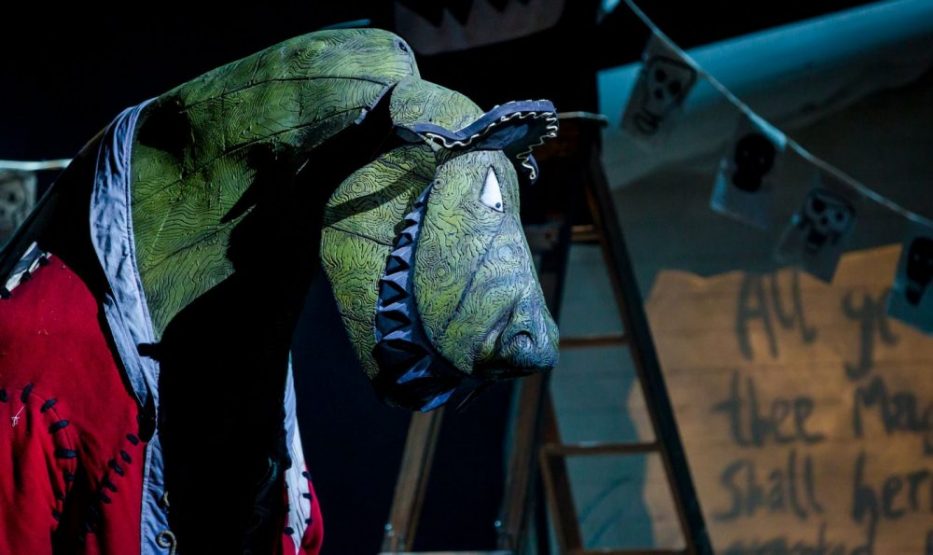 Flinn (James Keningale), Tom (Tom Syms) and Pearl (Emily Essery) are starring as pirates in their primary school play, when Tom and Pearl are kidnapped by real pirates – and not just any pirates, pirate dinosaurs.

Brave Captain Flinn manages to fight off most of the pirate dinosaurs, but when the pirate captain Mr T the T-Rex (Sullivan Brown) appears, he threatens to turn Tom and Pearl into sausages unless Flinn can find and bring him the mythical magic cutlass.

Flinn sets off on an underwater adventure to retrieve the magic cutlass and tries to use it to rescue his friends and get them safely back home.

But the dinosaurs aren’t prepared to give up that easily…

Les Petits theatre company bring another favourite children’s book to the stage as a musical and puppeteering extravaganza, in one of the loudest, most lively shows of its kind.

As with the Julia Donaldson adaptations and others aimed at younger children, the well-known book is padded out to the best part of an hour with a lot of songs and a little audience participation.

Unlike with a show whose musical provenance you know, these songs will be an unknown quantity; some feel a little forced but most will win your round, with catchy – if not particularly memorable – tunes that will have even the mums and dads clapping and singing along.

The story is – of course – tremendously silly and doesn’t even work within its own world, but any adult familiar with its source material might feel the same about the Captain Flinn books themselves.

But this isn’t aimed at the grown-ups but the children, and what three or four year old doesn’t love pirates and dinosaurs, so combining them is just the ticket to entertain young kids with swashbuckling adventures, lively song and dance routines and imaginative puppets that are surprisingly faithful to the book.

There are a handful of gags that don’t quite hit the mark for adults but there’s plenty of gentle humour that will have youngsters in fits of laughter.

The staging is surprisingly ambitious, given that the run is mostly made up of one-day per theatre, before setting sail to another port, the very next day.

It seems a bit odd having the primary school children played by adults but they’re plenty energetic enough to spend an hour running around the stage, waving swords, outwitting dinosaurs, singing their hearts out – doubling up as both children and dinosaurs – generally appearing to have as good a time as a bunch of children you might see dashing around the playground in your local park after a pirate party.