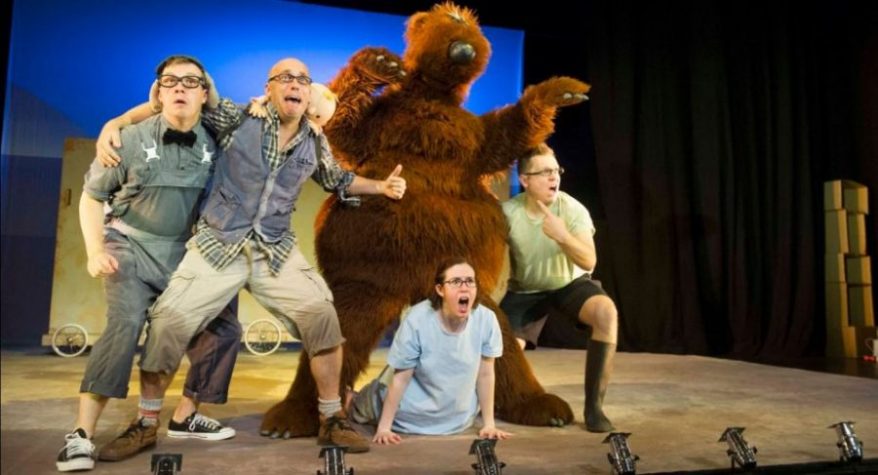 Anyone familiar with Michael Rosen’s popular children’s caper will know that this revolves around a father and his children, who boldly set out on a bear hunt.

It’s more fatherly exuberance than any real expectation that they might actually find a bear; it’s about the adventures he leads them on and the obstacles they encounter – long grass, a river and a forest, among others – all of which, they can’t get over and they can’t get under – so they have to go through. It’ll mean a bit more to you if you know the book.

But when their search has unexpected results, they find themselves reassessing their goals.

All of which makes it sound like a rather heavy-handed drama, but it’s nothing of the sort.

This latest stage adaptation of another children’s favourite follows a familiar format; a story that takes five minutes to read – or sing – to your children is embellished with songs and audience interaction that will enchant and enthrall young kids.

Whether they’re sprayed with water, sprinkled with snow or encouraged to shout at the cast, children will get involved from the start, joining in the adventure and singing along.

It’s also interesting to see, from a set designing point of view, the imaginative way that each obstacle is put on stage.

Unlike adaptations of Julia Donaldson’s books, which are primarily known as books, We’re Going on a Bear Hunt is slightly different, in that many parents will be used to singing this to their children – which makes it somewhat disconcerting that the main song in this show is now the one they’ll have heard Michael Rosen himself singing.

But if watching a bunch of grown-ups jumping around in buckets of water, smearing fake mud over each other and rolling around in pretend bear poo is the kind of thing that will entertain your young ones, this is a no-brainer.

It’s a tried and tested formula – a small cast, one of whom doubles up as an instrumentalist, doing their own set changes as they generally have fun with a set of songs and props that roughly adhere to a familiar story.

As long as you’re not expecting it to stick too closely to the book – or song – that you already know, this will be an hour of entrancing fun for young children.