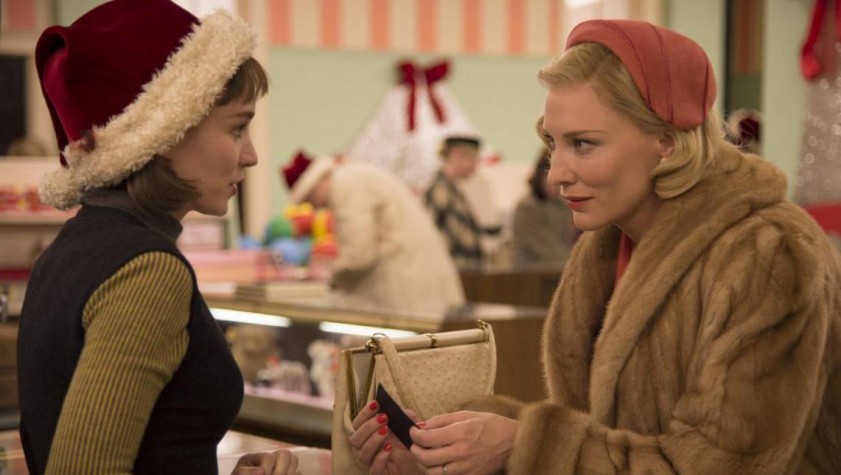 Life was very different in the 1950s. Women were very much expected to jump to the tune of their husbands, but this didn’t suit strong women or bad marriages, and Carol (Cate Blanchett) was a strong woman in a bad marriage. A marriage so bad that separation is already on the cards. Freedom is around the corner, but with a custody battle for their daughter looming, the situation is delicate.

During a pre-Christmas trip to a department store, Carol’s eyes meet those of an introverted young shop-girl, Therese (Rooney Mara).

As post-war America’s social mores dictate, an attraction between two women has to be kept secret – from society in general and from Carol’s proud and not-yet-estranged husband, Harge (Kyle Chandler), in particular.

So when a horrified Harge gets a whiff of what’s going on, he starts to make it difficult for Carol to see their daughter and Carol decides to whisk Therese off on a road trip, to give them a chance to explore feelings that they’re simply not meant to have.

From Far From Heaven to the recent TV mini-series Mildred Pierce, Todd Haynes is that rare Hollywood beast – a director who’s built a career on strong women. Even his biopic of Bob Dylan, I’m Not There, starred Cate Blanchett as the iconic folks singer.

So it’s no surprise to see him – with two actresses at the top of their game – pushing the boundaries again with two women against the world.

Here, he effectively portrays a time long before society began to move towards accepting homosexuality. In many cases, it wasn’t so much that people disapproved – it was more that it just never occurred to them that loving someone of your own sex might even be a possibility.

Based on a novel by Patricia Highsmith, an author who – like her protagonist – had relationships with women during this period, the necessarily restrained performances hide emotions forbidden by those around them until the pair are unable to contain themselves any longer, damaging Carol’s hopes of securing custody of her daughter and jeopardising her paramour’s similarly unsatisfying relationship.

But while it’s the latest in a long line of films that highlight the injustice of previous generations refusing to allow everyone to love whomever they wanted, the narrative was disappointingly linear and opportunities for real drama and intrigue were wasted.

The only exception to the linear narrative was in its committing one of the worst crimes of modern-day cinema; starting with a scene from later in the story, with no clear need or purpose.

Concentrating on the women at the heart of this story leaves the few male characters feeling underdeveloped and consequently, as happened with Suffragette, most of the men come across as weak, narrow-minded, selfish or otherwise unsympathetic – all of which might have been the case, but it does feel a little like cinematic-shorthand.

Carol highlights the isolation and emotional turmoil felt by people who don’t fit the accepted norm, but while many films with a political – or politically correct – message can help to change the views of a society that needs to have its views changed, this is one of those occasions where the problem is, if not completely fixed, well on the way, which weakens the message, if not the drama.