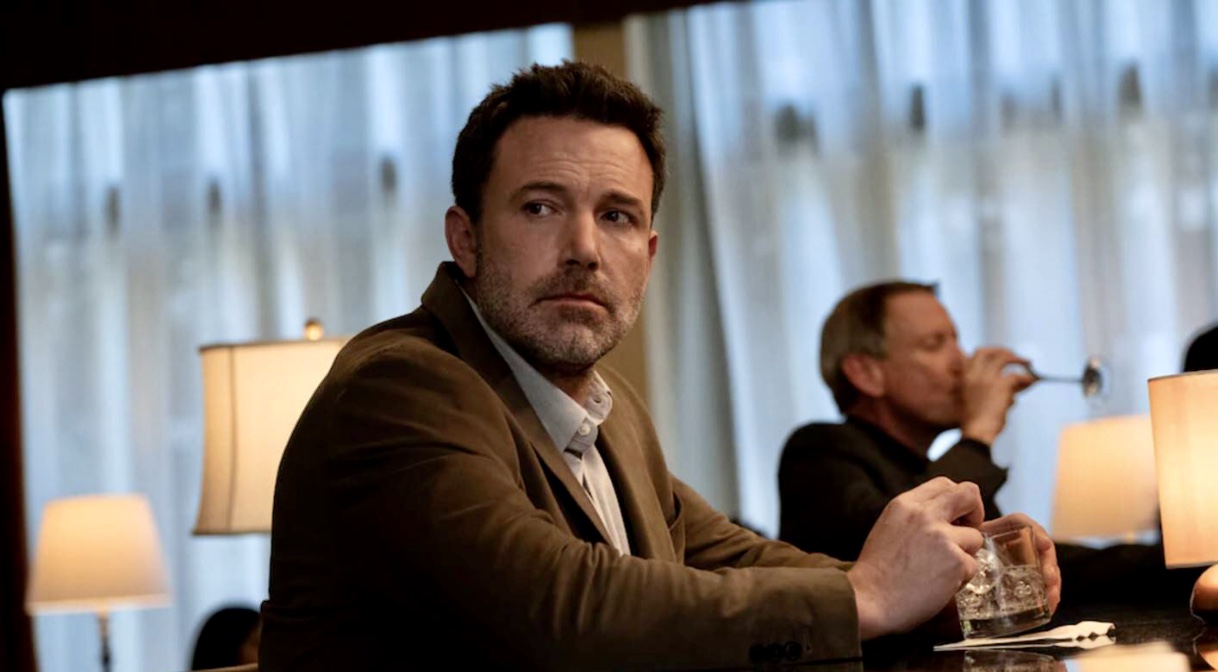 Vic (Ben Affleck) made his fortune designing a computer chip that helps military drones find their targets and has long since retired to a nice house in the country with his flirtatious young wife Melinda (Ana de Armas) and their daughter.

Theirs is not a happy marriage. Vic is prepared to let Melinda stray, as long as she ultimately agrees to stay with him.

But every time she finds a new man – and flaunts him in front of her husband – he disappears, often to turn up dead.

When pianist Charlie (Jacob Elordi) turns up dead in the pool at a party, one of their social circle, a local real-life crime-writer (Tracy Letts), gets suspicious and starts digging to try to prove his theory that Vic is killing Melinda’s lovers, as quickly as she can find them.

This was the film to draw director Adrian Lyne out of retirement, twenty years after he released Unfaithful, another thriller about a marriage that’s damaged by the infidelity of the wife.  That was nominated for an Oscar – this won’t be, not least because a month before its scheduled theatrical release, it was pulled and sent straight to streaming.

You can perhaps see why the Fatal Attraction and Indecent Proposal director was drawn to this project; two attractive and highly accomplished stars – Ben Affleck and Ana de Armas – and based on a novel by Patricia Highsmith, whose previous film adaptations have included Carol, The Two Faces of January and The Talented Mr Ripley. So what went wrong?

The first problem is that while – at first – you feel sorry for Ben Affleck’s Vic, having to watch his wife flirt – and worse – with other men to avoid losing her altogether – he’s never particularly sympathetic – not least from the moment that he tells her current squeeze that he killed her previous lover. Is it a dark joke or a warning?

Therein lies the premise of the film – did he do it or didn’t he? Should we feel sorry for him or not? Is he an innocent man trying to save his marriage, or is he getting kicks from killing? Is she in on the killing spree with him? There are some interesting building blocks for a psychosexual thriller here, but the handling is so in-your-face and lacking in subtlety that you never really like – or care about – anyone.

It’s basically a couple of hours of watching two beautiful, selfish, rich people destroying the lives of each other – and everyone around them – without any real consequences.

And who are these people? A bunch of rich folk in their thirties and forties, doing nothing but partying like teenagers while their parents are out of town. No-one seems to work – this world just doesn’t feel real.

It’s not so much a whodunnit as a did-he-do-it, as there aren’t many other suspects to choose from, so it becomes obvious quite early on whether Vic’s a killer, but apart from Tracy Letts, no-one else seems particularly fussed, one way or the other. And with no fewer than four men disappearing or being found dead during the course of the film, all linked to the same married woman, the police show relatively little interest. All of which makes for little tension and few thrills.

Once it’s clear what’s going on, the plot generally – but the final act in particular – relies on far too many convenient, unlikely coincidences to unfold and the denouement comes out of nowhere, with no explanation, leaving you wondering what you’ve just been watching.