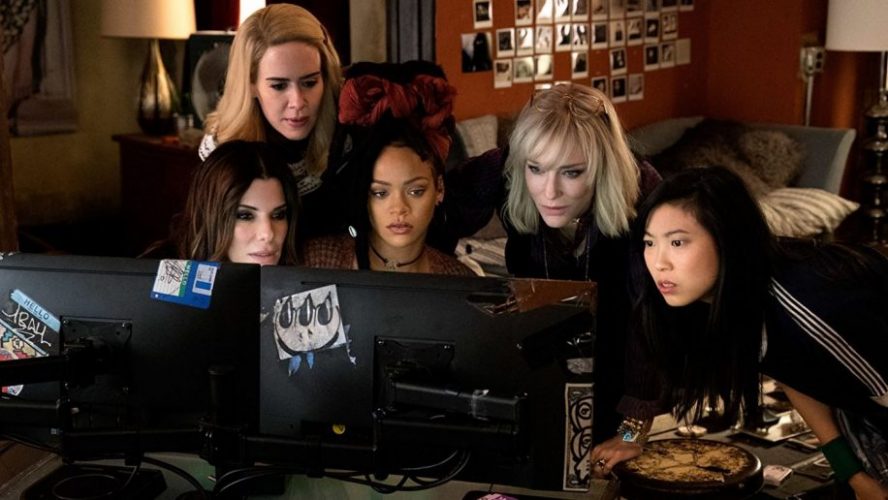 The plan is to steal a Cartier necklace worth over 150 million dollars from the neck of Hollywood celebrity and star Daphne Kluger (Anne Hathaway) and as a side bar take revenge on her duplicitous ex-boyfriend Claude Becker (Richard Armitage) who landed her in jail.

This star powered all-female ensemble prove that women can pull off a comedy crime caper with as much style, finesse and charm as their male counterparts and are just as entertaining to watch.

Of course this spin-off follows the blueprint of the previous Ocean’s films in that it is terribly slick and stylish with a very detailed and intricate but highly implausible plot. However, where it differs is that it is easier to follow and the finale and great reveal make much more sense.

The dream cast, which includes three Oscar winners and a global singing star, all bring their A game to the table and show how it is done. Rihanna holds her own as the tech-savvy 9 Ball opposite the great and affable Bullock and the sophisticated and sublime Cate Blanchett, who plays Debbie’s best friend and partner in crime Lou.

Hathaway seems to be relishing the opportunity to play the stuck up and narcissistic villainous Kluger, which she does with gusto, but it is Helena Bonham Carter who steals the film as the eccentric and bonkers Irish fashion designer on the skids, Rose Weil.

The men take a back seat in this comedy although James Corden stands out like a sore thumb as the bumbling and cockney sounding insurance investigator who is called in to investigate the robbery and who has been chasing Debbie’s family for years. His character is very annoying and slows up the action. Less would have been more.

It is fun to spot the celebrity cameos, of which there are many, particularly at the Met Gala (including Anna Wintour, Katie Holmes, the Kardashians and the Jenners). Ironically Rihanna was one of this year’s co-hosts.

The director and co-writer Gary Ross (The Hunger Games/Seabiscuit) delivers an action packed, fun-filled crime caper, on an impressive scale. which also takes a passing swipe at the shallowness of celebrity culture.

This hugely enjoyable ride is sheer escapism and I hope it sets the trend for many more female character-driven films to come.