This may have been the year of the strong woman at the London Film Festival but it was a biopic about a visionary but Machiavellian genius of a man that closed this year’s cinematic event.

Michael Fassbender gives a blinding performance as he gets under Jobs skin and his psyche as we observe him backstage at three iconic product launches ending in 1998 with the unveiling of the iMac.

Steve Jobs is released in the UK on 13th November 2015

HE NAMED ME MALALA

Davis Guggenheim’s compelling documentary “He Named Me Malala” epitomized the London Film Festival’s strong women theme. It centres on teenaged Malala Yousafzai who was shot in the head when she was fifteen by the Taliban for championing girls’ education in Pakistan.  It is a powerful and inspirational portrait of this extraordinarily brave young woman and relentless campaigner who won the Nobel Peace Prize at 17.

CATE BLANCHETT IN BOTH TRUTH & CAROL

Cate Blanchett gives another inspired performance in the riveting political newsroom drama Truth.  It depicts the controversy sparked by the 2004 CBS 60 Minutes report into President George W Bush’s military service which cost the careers of its veteran presenter Dan Rather (Robert Redford) and its leading producer Mary Mapes played by Blanchett.

But since this isn’t yet scheduled for release in the UK, we’ll recommend another film featuring the BFI’s newest Fellow; Blanchett also stars in Todd Haynes’ exquisite looking “Carol” in which she plays a sophisticated older married woman who defies the conventions of post war America by becoming involved with a young female shop assistant (Rooney Mara). 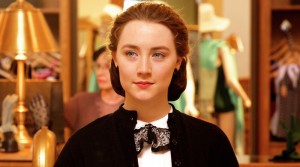 “Brooklyn” is a gorgeous romantic drama set in the 1950s about an Irish girl (Saoirse Ronan) who leaves her small home town in Ireland to travel to New York to find her fortune. Ronan is totally captivating, as she brings to life Nick Hornby’s delightful and stirring adaptation of Colm Toibin’s best-selling novel, in a film directed by John Crowley.

Brooklyn is released in the UK on 6th November 2015 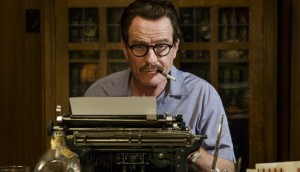 And finally the poignant but hugely entertaining “Trumbo” a biopic on the double Oscar winning Hollywood screenwriter Dalton Trumbo played superbly by Bryan Cranston (Breaking Bad). He was one of the “Hollywood Ten” who was blacklisted from working in Tinsel Town  for refusing to testify before a congressional committee investigating communists in the film industry in the 1940s. It takes a wonderful look at Hollywood in its heyday and the hypocrisies of the time.

Trumbo is released in the UK on 5th February 2016