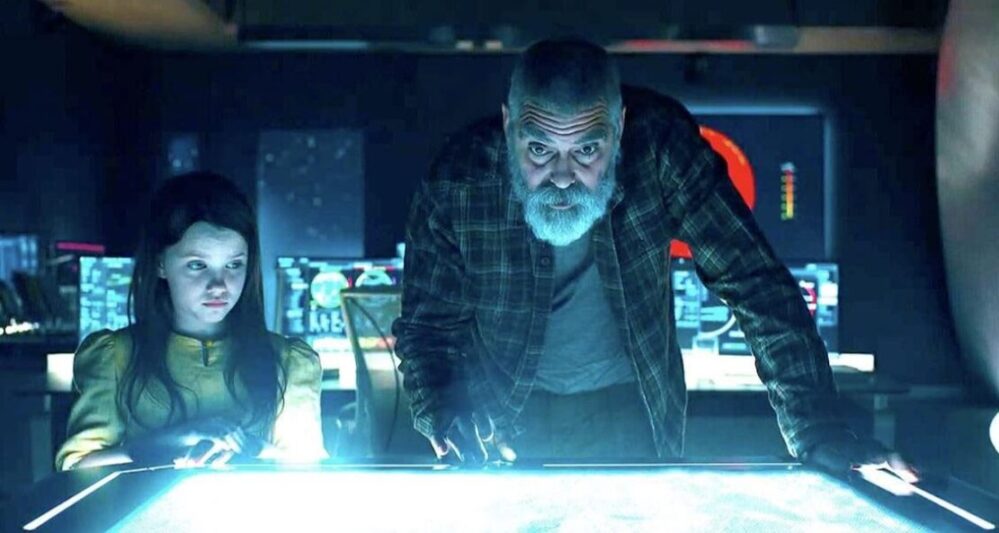 In the not-too-distant future, there’s been a cataclysmic environmental event that’s killed most of the Earth’s population and forced any survivors underground.

Rather than heading to safety himself, an ageing scientist Augustine Lofthouse (George Clooney) decides to stay at his Arctic base to try to contact the crew of a space craft, Æther, to warn them not to return to Earth.

But the crew – led by Commander Adewole (David Oyelowo) and Sully (Felicity Jones) – have lost communication with Earth, on their return from K-23, one of Jupiter’s moons that Augustine had long ago identified as a potentially habitable.

George Clooney’s latest directorial effort is a small film, wrapped up in what was originally planned to be a huge IMAX spectacle – one of many releases to be crushed by the coronavirus pandemic and sent straight to Netflix after the briefest of theatrical windows.

The story is simple – scientist tries to stop astronauts returning to an Earth that’s been destroyed by an environmental disaster – and it’s very much a two location narrative; on Earth with Augustine and on the Æther with the crew.

Each story is largely slow and quiet, with a sudden and unexpected action sequence – on Earth, Augustine falls through the ice while trying to reach a bigger transmitter, while in space, the crew are caught up in an asteroid storm while trying to fix their communications system.

We get a little bonding between the crew in space and back on Earth, there’s some back-story, in flash-back, where we learn a little about what’s driving Augustine.

The overall narrative lacks focus – is it about a great scientist, with regrets, who’s trying to do the right thing after all these years – or is it about a crew in danger of being stranded in space? Both story-lines seem to have as much screen-time and so as much prominence. They each follow the same “quiet, quiet, loud, quiet” pattern.

It’s difficult to make a film that feels truly fresh these days, with many of the plot points, on earth and in space, feeling familiar – from environmental apocalypse and crackling communications as the lines go down, to planetary exploration and dangerous exterior expeditions, his loneliness contrasted with their camaraderie, the internal battles between ambition and duty, hope and regret, optimism and guilt. Almost every element of the narrative has been seen in other films – just put together in a slightly different order.

It’s a thoughtful drama that touches on many issues and explores various arenas – but very little feels fresh, surprising or in any sense revelatory. Perhaps the two best things about the film are Clooney the actor – with a measured, understated performance which requires a burst or two of unexpected energy – and Clooney the director, whose vision is beautiful, from reflections and holograms to space-scapes and spacecraft design, The Midnight Sky looks gorgeous. So gorgeous that it’s the kind of film you want to experience on IMAX – not on your computer screen.