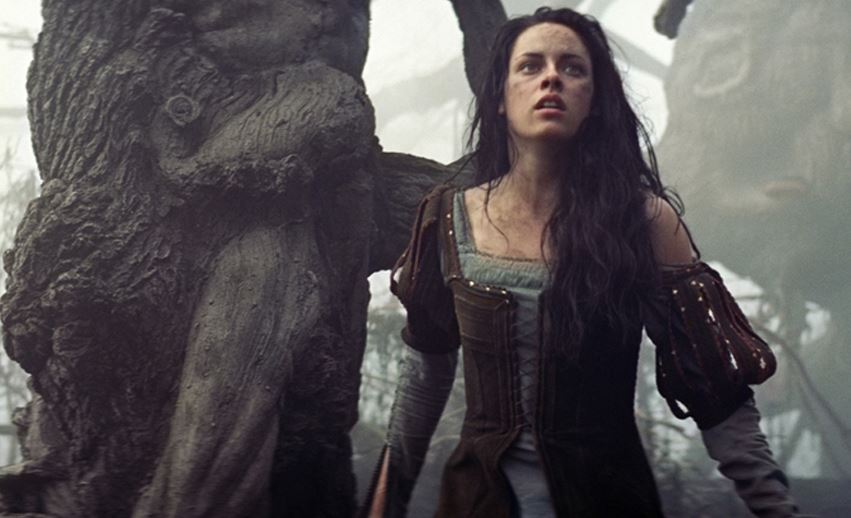 The widowed king – and father of Snow White (Kristen Stewart) – hasn’t been able to love anyone else since the death of his queen.

But when he finds a beautiful damsel, Ravenna (Charlize Theron), in a carriage after winning a fierce battle, he falls head over heels for her. The following day, she becomes his new queen – and that night, to avenge the way she’s been treated by men in the past, she kills the king and claims the throne.

When her magic mirror damages her pride by informing her that Snow White is fairer than her, the evil Queen imprisons her step-daughter.

The mirror also informs her that by eating Snow White’s heart, she can achieve everlasting youth and beauty, but before she can do this, Snow White escapes.

The Queen sends a huntsman (Chris Hemsworth) to find her, kill her and bring back her heart, but when Ravenna fails to deliver on her side of the bargain, he switches sides.

With the help of the huntsman, eight dwarves – erm, yes, that is eight – and her childhood love, Prince William (Sam Claflin), Snow White sets out to overthrow the evil Queen and reclaim the kingdom that’s rightfully hers.

You’d be forgiven for thinking we’ve been here before. Recently.

Last time this particular Grimm tale made it to the big screen, it was Julia Roberts saying “Mirror, Mirror…” sending Armie Hammer’s prince charming to find Lily Collins, while her needs were attended to by her courtier Nathan Lane.

Here, a much darker Queen, Charlize Theron, sends Chris Hemsworth’s huntsman to do the dirty work while her brother remains at her side.

It’s the same story – of course – but with different characters occupying different roles, but carrying out the same functions.

Tweaking the plot a little gives the film-makers the opportunity to leave us wondering what might happen next – arguably essential when we’ve seen the same story so recently – but one of the big questions posed by the plot is answered by the title of the film, thereby tearing up the trump card.

But while the story is the same, the mood is very different – it’s a much darker tale. While Mirror Mirror was predominantly camp, with the dwarves being among the more serious characters, this time, we’re presented with something more akin to a Tim Burton-style gothic horror, with the dwarves providing what little humour the film allows.

Theron is less fun than Roberts – and while she shouts more, she’s not especially frightening. Kristen Stewart plays the eponymous heroine more like Joan of Arc. Neither of the male leads – Hemsworth’s huntsman and Sam Claflin’s prince – are particularly convincing, charismatic, or entertaining.

And the most notable thing about the dwarves – apart from the fact that there are eight of them – is that they’re played largely by high profile full-size actors, including Bob Hoskins, Ray Winstone and Nick Frost, who are various shrunk using special effects of made to stand in ditches.

It’s more than a little disconcerting to see them presented as dwarves – and I can imagine that Warwick Davis – or his Life’s Too Short alter ego – wouldn’t be too pleased with regular actors playing little people.

Snow White and the Huntsman is certainly a better film than its recent predecessor, but it’s targeted at a difference audience and young girls who like pink dolls and party dresses would be best off sticking with the earlier pantomime.

This new film is only slightly less flawed, but will appeal to a wider demographic.