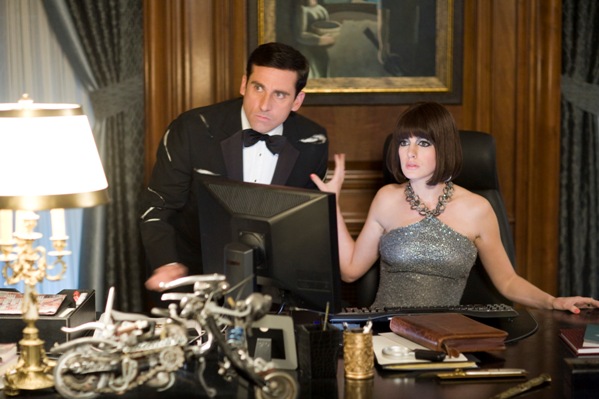 In this loveable spy spoof, the good guys of CONTROL – under The Chief (Ian Arkin) – are involved in a perennial battle to save the world from the bad guys of KAOS – under Siegfried (Terence Stamp).
Maxwell Smart (Steve Carell) is a number crunching intelligence analyst for CONTROL, desperate to switch to the more exciting part of the business – becoming a field agent. But even though he passes all the tests, the Chief can’t bear to lose him from the back-room.
But when the identities of some of CONTROL’s top agents are uncovered in a daring KAOS raid on their headquarters, the Chief has no choice but to send the unknown Smart out alongside Agent 99 (Anne Hathaway), a spy so beautiful that it’s surprising that she can’t just kill her enemies by giving them a heart attack with a flutter of her eyelashes.
The adventure that follows takes Smart and Agent 99 to Russia and back, as they try to foil a plot by KAOS to kill the US President at a classical music concert in Los Angeles.

Get Smart is based on a long-forgotten Mel Brooks TV spoof from the 60s and feels, in many ways, like it belongs back in the past with its forebear.
It’s a rather quaint and old-fashioned spy spoof, tipping its hat more at Bond than Bourne – rather like Naked Gun parodied the cop shows of the 70s and early 80s more than it did its contemporaries.
The performances are suitably knowing and the action – while often predictable and pedestrian – nips along briskly and carries you with it.
It’s not taxing and nothing like as imaginative as it could – or should – be.
Most of the humour, of course, comes from the mismatch of Carrell’s lumbering buffoon and Hathaway’s unworldly elegance – but this leads to one of the film’s thematic difficulties – is Smart incompetent or is he – as his name suggests – smart? The personality and characteristics of the main character flip around wildly to best fit the scene in question, which – while it’s meant to be a comedy – doesn’t help the dramatic side of the film come across with any degree of believability.
The humour is more silly than clever, which narrows down its target audience considerably.
It’s perhaps telling that rather than talk of a sequel, they’ve already shot a spin-off feature about two of CONTROL’s techno-geeks – played by Heroes’ Masi Oka and Studio 60’s Nate Torrence.