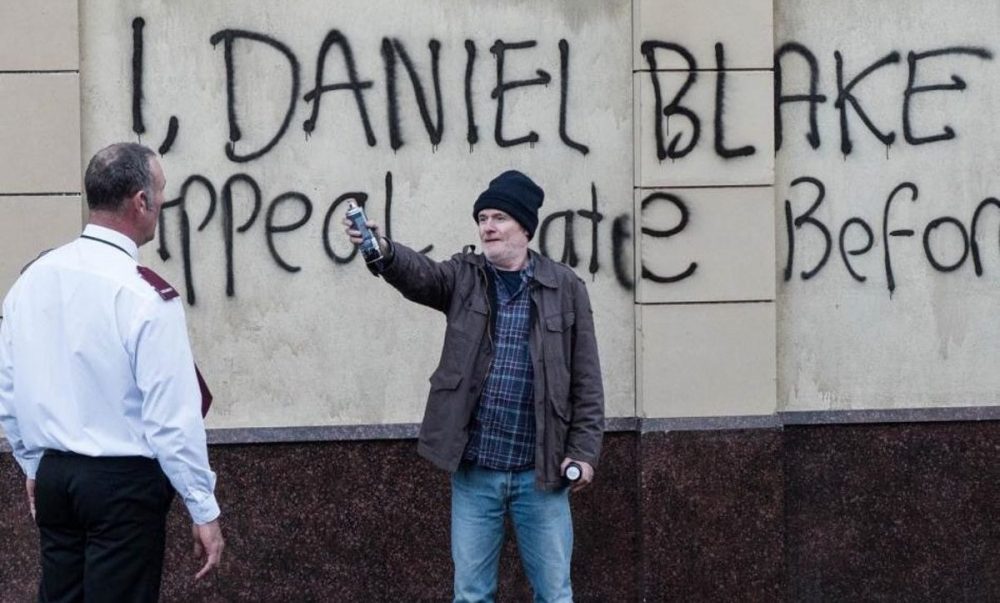 His doctor says he’s too sick to work, but the job centre says he’s not sick enough for disability benefit, so if he wants unemployment benefit, he has to prove that he’s looking for work.

On one visit to the job centre, he encounters Katie (Hayley Squires), a young single mum from London, who’s been relocated to Newcastle, where she doesn’t know anyone, as that’s the only council house available.

She’s having her own difficulties at the job centre and soon she and Daniel become friends, helping each other through the complexities and complications of the welfare system.

Ken Loach’s first outing since his aborted retirement is pretty much what you might expect from Jeremy Corbyn’s flag bearer in the film industry – the polemicist who uses social realism to spread his proudly socialist message.

While the eponymous Daniel Blake is an exceptionally empathetic character – thanks to an honestly authentic performance from first time dramatic actor Dave Johns – there’s not much of the arc that cinema usually provides an audience. There’s not a particularly varied journey, on which we can be rooting for him. He begins the film as a the sickly, downtrodden loser and after failing to make enough progress against the authorities, he ends the film in a similar vein – not least because of a dramatic twist that’s almost more cruel than the government Loach is trying to condemn. He gets his point across without a plot – and then adds a plot point, just when he doesn’t need one.

Katie’s character makes similarly little progress. It’s only the solace that comes from their friendship that lifts the pair out of the doldrums, but that friendship blossoms early enough that there’s little narrative scope, as they make their linear journey from one problem to the next, together.

There’s a simple message here – that some people need benefits and the state won’t give it to them, forcing them to suffer the indignity of food-banks and the charity of others – raising the question of whether dignity would be achieved through regular, more fruitful trips to the benefits office. The secondary message is that if you are one of those people, you needn’t suffer alone, as there are others like you – many of them – from all parts of the country’s demographic – young and old, male and female, north and south. None of this comes as much of a surprise.

Incidentally, it could be argued that while there are many people in this position, if the majority of voters shared Loach’s view, there’d be someone else in Number Ten. This film is very much preaching to the converted – to the vocal minority.

But the message you don’t get from Loach – and to be fair, why should you? – is that in a country with a growing debt, that is looking to save money so that it can prioritise helping the most needy, possibly at the expense of those who aren’t quite so needy, lines have to be drawn somewhere. Where those lines are drawn are clearly a matter for debate. And the mechanisms for establishing where those lines are drawn are clearly not the exact science that government policy necessarily aspires to achieve; if there are millions of people on one benefit or another, they will all have different stories and different needs, but they can’t each have their own legislation, so the government tries to simplify the system, meaning that while some people can easily get welfare that they don’t need, others are left destitute. Loach might well be right in arguing that this is not always fair. But that’s a political point – a social argument – not a film.

It’s true that it’s not his job to provide a solution. But it is his job to engage the audience, with the ups and downs of everyday life. It is, at times, gut-wrenchingly emotional, but it’s always the same note – the same emotion. Even those who don’t live in such communities will see and hear stories about people in this position almost daily, if not on the news or in our papers, then on their facebook feeds. This leaves the film with little, if anything, new to offer from a narrative point of view.

The film is even a little confused about what it seeks to achieve; it suggests that people on benefits suffer the indignity of having to beg for money they’re not even given – but then it takes away any hope of dignity by patronising them with the suggestion that just because they haven’t been dealt as good a hand as others, the government should just give them whatever they want.

I, Daniel Blake plays like a tick-box exercise, with Loach and Laverty condemn a litany of government policies, the local workers who implement them and their consequences – bureaucracy, benefits assessment tests, foodbanks, humiliation – and a range of angry insults aimed at a long-since forgotten Work and Pensions Secretary. Even the Prime Minister has changed since this film was conceived, highlighting the fact that the real world moves more quickly than art – which might be of some consolation to Loach. As long as it takes for him to get his next heart-felt polemic off the ground, we could find another Premier or another Work and Pensions Secretary has brought in new policies for him to counter or even, perhaps, softened existing ones. But it could be argued that his support for Jeremy Corbyn has made it just that little bit less likely that the next Prime Minister will be from his preferred side of the political spectrum – but if he got his way, what would he have to make films about?

Loach and Laverty have previously delivered passion, humour, powerful drama, uplifting rhetoric – but here, all we get is pity. Almost no humour and very little hope. That might well be the lives of many people in these communities. But that doesn’t make it cinema. It does, though, make it a Palme d’Or winner, apparently.