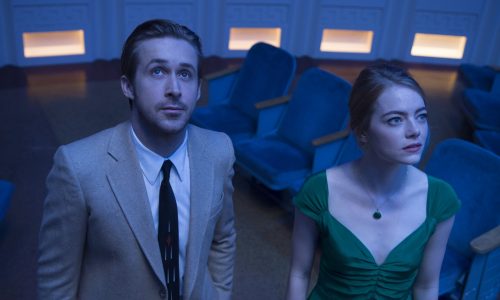 The London Film Critics Circle has named the feel-good musical La La Land its Film of the Year.

But the top prize was the only honour picked up by the Oscar-favourite that won a record seven Golden Globes earlier this month.

The critics decided that the best director of the past year was the Hungarian László Nemes, whose Son of Saul picked up the best Foreign Language Oscar last year, but the Critics Circle didn’t think his film was the year’s best foreign language film – that honour went to the upcoming German father-daughter drama Toni Erdmann.

La La Land’s writer-director Damien Chazelle also lost out in the screenplay category, to Kenneth Lonergan, whose Manchester By The Sea picked up a second award for its lead actor Casey Affleck.

French actress Isabelle Huppert repeated her Best Actress success from the Golden Globes, but for a different film – two weeks ago she was honoured for Elle but last night, it was for Things To Come.

The other acting awards of the night saw Andrew Garfield collect the Best British or Irish Actor honours for Mel Gibson’s war drama Hacksaw Ridge, while Lewis MacDougall was named the Best Young British/Irish Performer, for A Monster Calls.

As you’ll have noted, the London Film Critics Circle hands out prizes for both best actors – and best British or Irish actors – perhaps to ensure that home-grown stars don’t get overlooked at a ceremony organised by British critics. But the system allows the group to honour the big Oscar contenders, while recognising British talent too. Accepting his award for the Best British or Irish Film of the Year, I, Daniel Blake director Ken Loach took the opportunity to criticise what he called the “deplorable” Donald Trump, describing his election as US President as “an expression of failure” of the last fifty years of politics.

No awards ceremony is beyond reproach, whether it’s the release schedule on which they work or the parochial nature of some of the categories, but perhaps more than anything, it’s true to say that groups made up of dozens – or in the case of the Oscars, thousands – of individuals can’t truly be said to think in one voice. This is, perhaps, what can often lead to such peculiarities as seen last night, with the best film being deemed not to have the best director, the best screenplay or the best actors – which begs the question of how good a film it can really be – while the man behind last year’s Foreign Language Oscar winner was named the best director, but his film wasn’t chosen as the best foreign language film.

DOCUMENTARY OF THE YEAR
Fire at Sea

BRITISH/IRISH FILM OF THE YEAR
I, Daniel Blake

DIRECTOR OF THE YEAR
László Nemes – Son of Saul

SCREENWRITER OF THE YEAR
Kenneth Lonergan – Manchester by the Sea