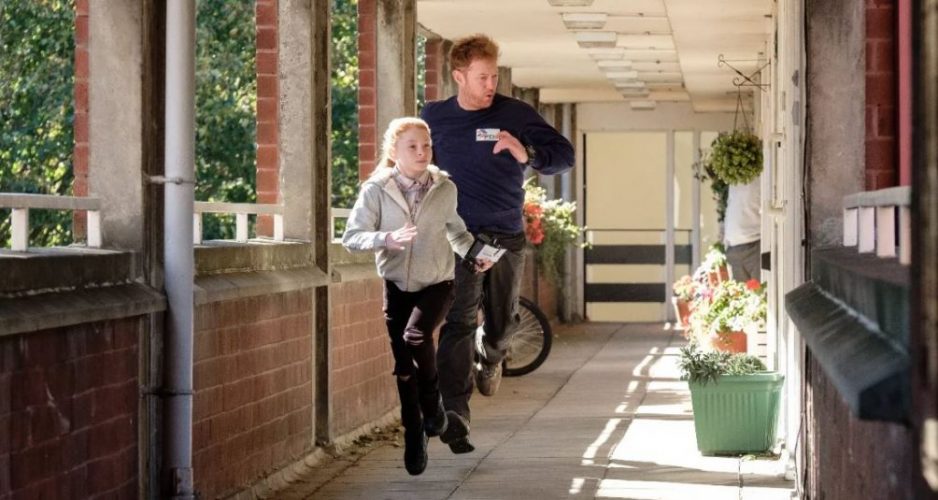 Ricky (Kris Hitchen) and Abbie (Debbie Honeywood) are loving, supportive and hardworking parents, struggling to make ends meet in the northeast of England. They’re finding it hard to keep their heads above water, whether it’s paying the rent or supporting their teenaged son and younger daughter.

Abbie’s a carer, but she’s not working as many hours as she used to. Ricky is hoping that he can make a better living than before as a delivery driver for a local courier firm; he wants to buy his own van, rather than renting one, to guarantee higher earnings in the longer term.

But for him to buy a van, Abbie has to sell her car, making it harder for her to reach the elderly people she helps.

While there is a prospect of big earnings if things go well for Ricky, his new job isn’t looking as rosy as he’d imagined as the targets start to bite. And the growing delinquency of his son poses its own challenges.

Sorry We Missed You is pretty much what you’d expect from Ken Loach – a hard-hitting drama, dissecting the life of ordinary people, struggling to make ends meet in an unjust world – people struggling in low-paid jobs that don’t value them as individuals.

This is a bit of a companion piece to his Palme d’Or winning I, Daniel Blake, in that while the earlier film follows a man on benefits, this time we go on a journey with characters described as the working poor.

Loach wants to show us that having work is no guarantee of being comfortable – particularly when the work is either not predictable or comes with conditions attached that seem impossible to meet.

His target, this time, is the gig-economy – people who are paid by the job, rather than for a job. A carer who is paid only while she is caring. A delivery driver who is paid only for the parcels he delivers. There are bonuses for meeting targets – targets that are impossible to meet. He’s working for himself, not for the courier, so if his van breaks down, he can’t deliver any packages, and doesn’t get paid. So he can’t afford to repair the van. On top of that,  he’s penalised if he fails to meet targets and he even has to rent equipment from the courier company in order to do the job.

It’s a brutal lifestyle, but Ricky is hopeful – he’s optimistic – against all the odds, he believes he can pull it off. In Hollywood, this would be about how his determination helps him rise like a phoenix from the ashes of his bad luck and make something of himself. But this isn’t Hollywood. This is Ken Loach’s reality.

It’s based on real-life stories – one often quoted is a man who died as a consequence of missing too many medical appointments because he couldn’t afford the fines that were levied if he missed work.

There are more such examples, but they’re exceptions. That doesn’t make it acceptable, but because such zero-hours contracts don’t work for everyone, it doesn’t mean they’re right for no-one, or worse – they should be banned. Some people are run over, but no-one talks about banning cars. Some people choke to death on food, but no-one suggests banning it. Loach seems to be asking us to throw out the baby with the bath-water.

Even in this film, no-one is forcing Ricky to do this job – it’s his choice – he’s determined to make it work. And the family’s financial problems almost pale into insignificance compared with the growing delinquency of his son and the desperation of his young daughter to help the family keep things together – does Ken Loach want to ban uncooperative teenagers too?

Life is tough and Loach is very good at demonstrating this, but there’s not always an all-encompassing solution. Life isn’t as simple as he wants to portray it to be. Whatever he suggests, no-one actively sets out to make other people suffer, least of all bosses who would make no money at all without people working for them; the bosses want to make money, of course, but so do their staff. Perhaps the system doesn’t need to be scrapped or overturned, but improved.

The beauty of this intimate chamber piece, though, is that unlike I, Daniel Blake, it’s less about criticising the government and authority – after all, Boris Johnson didn’t invent zero-hours contracts – it’s more about engendering sympathy for someone who is admirably doing his best against the odds.

The audience will be cursing the unsympathetic boss and willing Ricky on, but won’t be sitting there thinking “I wish I could pay twice as much for my Amazon delivery so that Ricky can get a more reliable van” – not least because Loach shows us that life’s problems are broader than just work.

Changing government or stopping courier firms imposing such strict rules on their “freelancing” drivers won’t stop teenagers being teenagers or the elderly being elderly, but if Loach is saying that they could at least lighten the load a little, that’s a slightly less controversial idea – and unlike I, Daniel Blake, on this occasion, he’s describing the problems on screen and keeping his campaigning off-screen.

But this isn’t a sociology or politics essay – it’s a film review, and as a piece of film-making, it feels less confrontational than much of Loach’s work. By leaving the politics at the door, as a family drama, Sorry We Missed You still feels like an angry indictment of society, but without alienating audiences on the right of politics.

As he prefers to do, Loach populates a modest canvas with unknown actors to bring authenticity to his characters and in the case of Kris Hitchen and Katie Proctor, as his daughter, the performances are heart-warming and heart-breaking. Along with Abbie, the characters are hugely likeable and even their son – while deliberately difficult – is a teenager that many will recognise.

There are heartfelt moments as the heavy cloud of despair hangs over Ricky’s dreams.

Whether it’s the responsibility of bringing up a family or trying to appease a no-nonsense boss, there’ll be plenty for most viewers to identify with in this domestic tragedy.