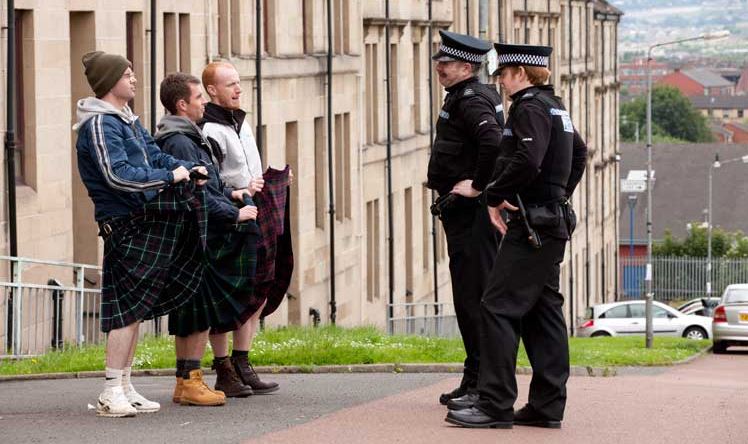 Luck is running out for unemployed Glasgow youngster Robbie (Paul Brannigan). He’s just been convicted of assault and is facing jail time.

But when his lawyer tells the court he’s about to become a father, the judge gives him the benefit of the doubt and sentences him to community service instead.

He strikes up a friendship with his supervisor Harry (John Henshaw) who takes pity on him when he’s prevented from seeing his newborn son by his girlfriend’s disapproving father.

Harry raises a toast to Robbie’s fatherhood with some whisky – something Robbie’s never tasted before.

Robbie is a natural and fast develops a taste – and a nose – for whisky. Since he shows interest, Harry decides to take Robbie away for a whisky-tasting event, to which his friends tag along.

Discovering how valuable the best whisky can be, Robbie and his friends realise that if they can syphon off enough to fill a few bottles, they could be comfortable for life.

Ken Loach has built up a reputation, over the years, as a director tackling worthy, social subjects with an outlook as gritty as it is grim. But of late, he’s had a more upbeat approach, alternating heavy material, such as The Wind The Shakes The Barley and Route Irish with more light-hearted fare, including Looking for Eric and this latest Scottish confection.

Sticking to his film-making team’s roots among the working classes, his Scottish writer Paul Laverty has delivered a heart-warming and sweetly comic tale of redemption, through fatherhood and whisky.

Even the opening court scene is full of laughs, and despite some violent scenes as Robbie is forced to confront the more hostile elements in his community, The Angels’ Share is overwhelmingly upbeat.

The performances are natural – to the extent that the organisers of Cannes felt that some English-speakers might not understand the accent and screened the film with English subtitles.

The lead actor Paul Brannigan was unemployed and coaching a local youth football team before this opportunity came along. “It saved my life,” he insisted, and has since found himself acting alongside Scarlett Johansson.

This film’s comic-touch is likely to boost its profile and box-office take and introduce Loach’s work to a wider audience. He doesn’t need the helping hand, but it won’t harm the younger members of his cast. As Robbie’s friends, Gary Maitland, Jasmine Riggins and William Ruane play their characters for laughs and succeed – expect to see their careers blossom after the exposure this will give them, in particular that of Ruane, who’s already appeared in two less commercially received Loach features.

But entertaining as it is, despite the social awareness of its creators, The Angels’ Share feels rather insubstantial. Unlike many Loach films, there’s no true antagonist, which keeps the mood light but weakens the narrative.

It’s fun, but it doesn’t really say much; some people don’t get on with their in-laws, having a hobby can focus your mind, parenthood makes you look at life differently, having no job can make you go off the straight and narrow – there are lots of ideas explored, but it all feels like a well-worn path to a destination we’ve visited many times before.

But it makes a nice change for the journey to have a happy ending.