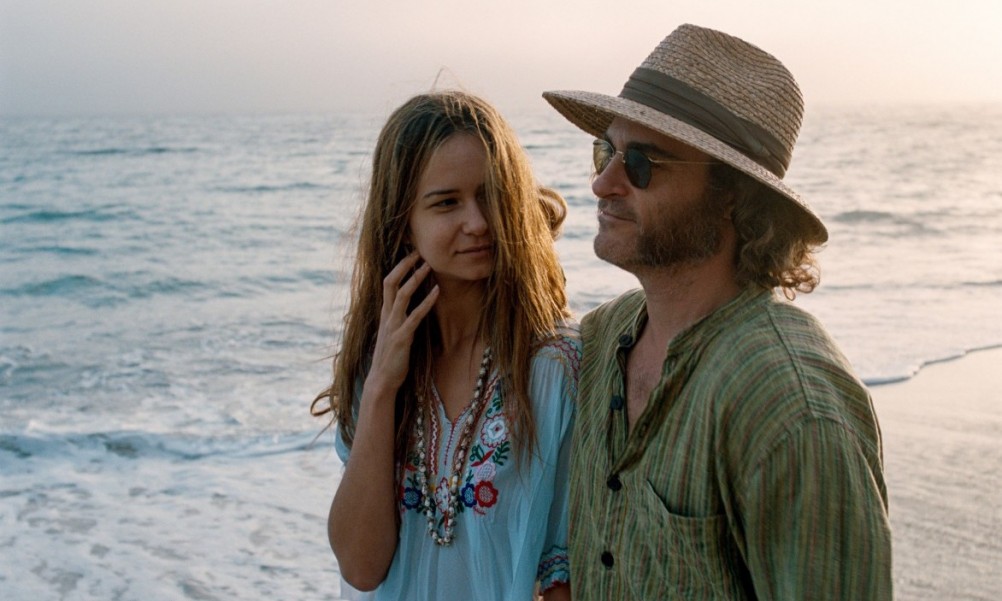 In 1970 LA, Doc (Joaquin Phoenix) is a drugged up hippie. He’s also a private eye, and an ex-girlfriend for whom he still holds a candle, Shasta Fay (Katherine Waterston), turns up unannounced at his beachside home to ask him to look into a case for her.

She’s having an affair with a powerful property developer (Eric Roberts) and she suspects that his wife (Serena Scott Thomas) and her lover are trying to get him committed to a mental institution.

During the course of what he thought would be a fairly simple investigation, Doc gets knocked out, finds himself accused of murder, gets mixed up with undercover agents, has an on-off partnership with a tough local cop (Josh Brolin), gets tangled up with drug dealers and prostitutes, meets a handful of surreal underground LA characters and tries to have another pop at his relationship with Shasta Fay.

Long and convoluted are adjectives that you might expect to describe a Paul Thomas Anderson film, but while most of his narratives have effectively unfolded, revealing more about the characters they portray, the randomness we’re served here seems to suggest that the auteur has been doing as many drugs as his protagonist.

It’s almost hard to believe that in adapting Thomas Pynchon novel, Anderson has simplified it – cutting out characters and subplots – but even so, there’s no point trying to preempt Doc’s discoveries, not because it’s particularly clever, but because one lead points to the next with almost chaotic abandon.

Inherent Vice is a crazy and unpredictable journey, but while it’s largely entertaining – not least because Joaquin Phoenix’s homage to Jeff Bridges’ Dude is more loveable than you could expect a dope-head with such enormous sideburns to be – there are a handful of moments of comedy so unexpectedly surreal that it’s peppered with belly laughs.

But while we like Doc and enjoy spending time in his company – his sparring matches with Josh Brolin’s Bigfoot are particular fun – it’s a less rewarding experience than it should be, in a film that’s considerably less focused, rounded and otherwise satisfying than Anderson’s previous films, such as Boogie Nights, There Will Be Blood or The Master.

Even in a telling of the tale that’s slimmed down compared with the source material, the film is positively bursting with grotesques, excellently played. But while Inherent Vice introduces us to a broad slice of LA’s underbelly, through some welcome cameos, most of the characters are too thinly drawn. And keeping up with who’s doing what to whom and why is enough of a challenge that it’s unlikely to be emotionally enriching or mentally engaging for viewers unfamiliar with, if not the novel, the world of the drugged-up private eye.

This is a big, sprawling piece of entertainment, which delights in introducing us to many of the stereotypes lurking beneath the surface of 1970s LA, but it doesn’t really seem to have much to say about its period or ours.