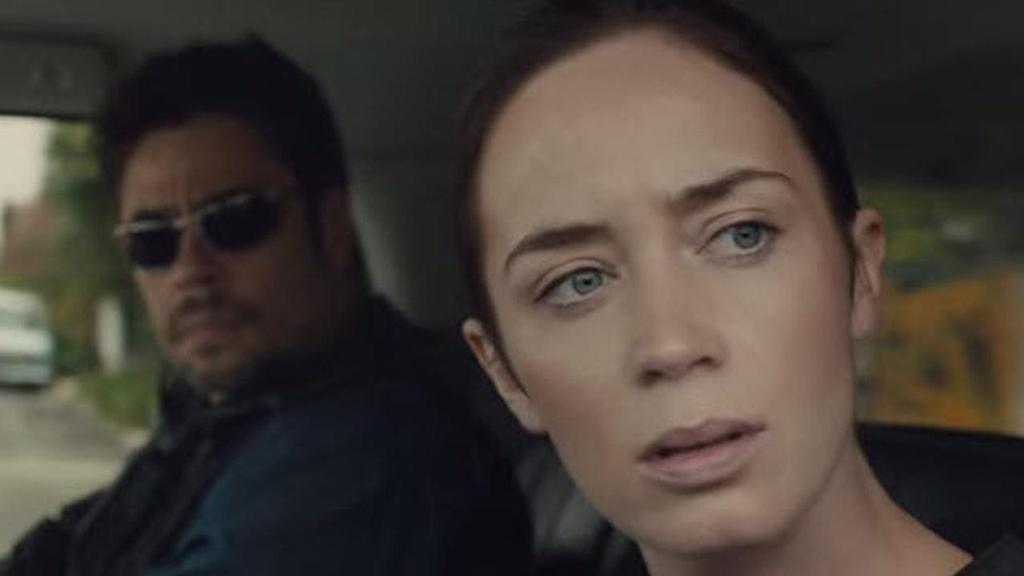 He wants her to join a multi-agency mission to combat the Mexican drug cartel that she’d been targeting.

On the way to the border town of El Paso in Texas, she’s introduced to another member of the team – the mysterious Alejandro Gillick (Benicio del Toro) – and she’s not quite sure what to make of him.

Arriving in El Paso, Kate starts having doubts about the mission when they are driven into Mexico; she hasn’t been told in advance – and neither have the Mexican authorities.

Before long, bullets are flying, suspects are being smuggled across the border, money is changing hands – in short, laws are being broken … by those selling themselves as the good-guys.

Kate is stuck right in the middle and doesn’t like what she sees. But by the time she starts having real doubts and realises she’s out of her depth, she’s in too deep to get out.

The Canadian director of Prisoners, Denis Villeneuve, is back with a hard-hitting crime film, bursting with blood, corruption and questionable morals. And questionable certainly is the right word – while it might seem obvious that one country’s agents shouldn’t be working inside another country without its knowledge, let alone permission, if it stops uncontrolled drug smuggling and the prevents unnecessary deaths, can it be justified?

Unlike the so-called “war on terror,” in which people might protest that a government’s purported efforts to protect the public are a breach of the rights of law-abiding citizens, in a case like this, the only people whose liberties are being breached by the actions of the American agents are ruthless drugs barons, their lackies and the local authorities who are failing – for whatever reason – to deal with the problem themselves.

The glamorous ex-pat British actress, Emily Blunt, spends most of the film in a grimy T-shirt or body armour, as confused as we are about who she’s working for and what is expected of her. At the inner core of this film, she is the character whose journey is joined by the audience.

From Josh Brolin’s charming eccentric of dubious morality to Benicio del Toro’s determined vigilante, with a past, the outer core packs the heat and heft that a film of this scale requires.

Titled the Spanish word for “hit-man” and covering much of the same ground as films such as Traffic, Villeneuve delivers a taut thriller that certainly makes you question the authorities who claim to be keeping everyone else safe.

But for a relatively complex narrative, it’s oddly pedestrian and linear – first they go here to speak to this person, then they go there to speak to that person, who tells them to do this, which leads them to that and so on. It feels a little like a chess match in which the players aren’t planning too many moves ahead. And while it’s certainly an effective action film, it doesn’t seem to have the gravity or authority of some others in the genre.

The shock factor of Blunt’s entrance tees you up for a particular kind of thriller and while Villeneuve delivers a perfectly entertaining film, it doesn’t feel quite like what’s promised by the opening scene.