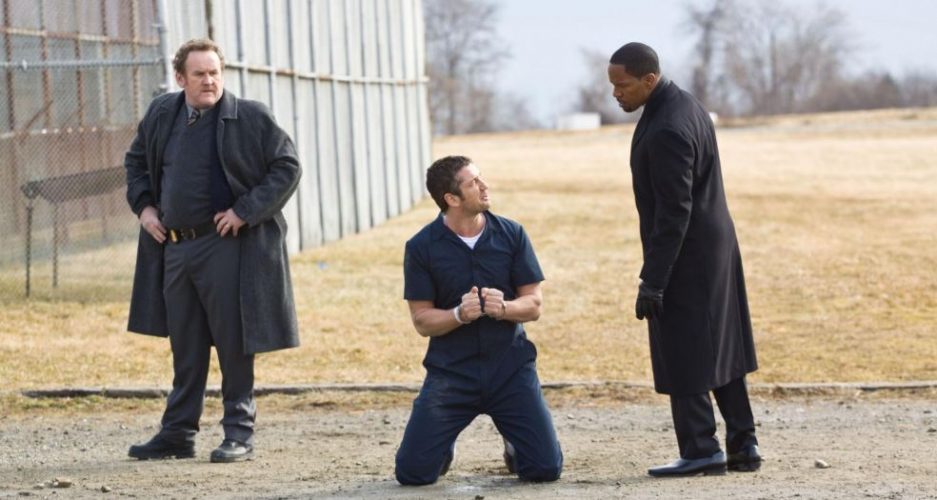 The world of respectable law-abiding family man Clyde Shelton (Gerard Butler) is turned upside down when two thugs, Darby (Christian Stolte) and Ames (Josh Stewart), burst into his house, stab him and leave him to watch while they rape and murder his wife and daughter.

The pair are caught, but there’s a mix-up with the DNA evidence, so Nick Rice (Jamie Foxx) from the DA’s office (also a father, of course) does a deal. Darby testifies against Ames – in exchange for a lighter sentence, he ensures that Ames get the death penalty. It’s better to get some justice than no justice at all, suggests Rice, in his failed attempt to convince Shelton that this is the right course of action.

We jump forward ten years. Darby – loathsome as ever – is a free man, living in a run-down area of town. He’s lured out of his hovel, kidnapped and brutal killed by Shelton, hell bent on revenge.

But even with both men now dead, Shelton’s revenge has only just begun. His attention – after ten years of meticulous planning – is directed at the legal system that he believes conspired to deny justice to his wife and daughter.

“It’s not what you know,” insists Rice. “It’s what you can prove in court.” This doesn’t sound like an entirely unreasonable conjecture. Neither does it sound particularly worrisome, in the real world, for the certainty of some justice to be preferable to the chance of none – a bird in the hand is, after all, worth two in the bush.

This makes it tremendously hard to identify with Shelton, who is presumably meant to represent the everyman of the audience against the evil of – according to this film – the judicial system.

At the start of the film, we can feel the pain of a man who is told he’s going to have to watch one of the men who killed his wife and daughter walk free after only a few years, but before long, it’s Foxx’s prosecutor who has become the voice of reason, representing the viewers against the calculated insanity of a brutal murderer on a par with Dennis Hopper’s bomber in Speed or Jigsaw from the Saw films.

As a viewer, it’s unusual to be asked to swap allegiances midway through a film – if indeed that’s what we’re being asked to do – perhaps we’re being asked to sympathise with a devious, unhinged and blood-thirsty looney, and accept that it’s OK to kill as many police and prosecutors as you can, until the judicial system agrees to stop doing deals with criminals and ensure that every suspect is pursued to the death chamber.

On one level, it’s a fast-paced and ingenious thriller, full of imaginative new ways to kill bad people, but on another, this imagination is put towards killing perfectly sympathetic and helpful people, in a film that consequently has no moral direction and feels like a hole-filled narrative mess, with no heart.

Butler’s chewed up attempt at an American accent is one of the few humorous escapes from the incoherent and brutal action.

Intentionally – or otherwise – F Gary Gray keeps you guessing until the end – and beyond – who on earth is the eponymous “law abiding citizen?”

The film’s only saving grace might be that he’s being deliberately clever enough to deliver the message that tragedy can flip the opposite sides of the same coin – but this loud and clumsy actioner would be using a sledge-hammer to crack such a subtle nut.