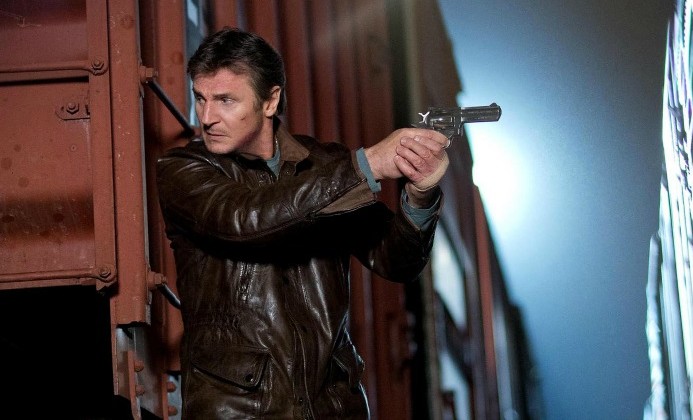 Jimmy Conlon (Liam Neeson) is an ageing mob hitman. For years, he worked for his oldest friend, Shawn Maguire (Ed Harris), but with Shawn trying to clean up his business, there’s less for Jimmy to do and he’s fallen on hard times.

As well as killing people, Jimmy’s work has also killed his relationship with his son Mike (Joel Kinnaman).

But when Mike takes on a chauffeuring job, taking two Albanian drug dealers to the home of Shawn’s son Danny (Boyd Holbrook), the explosive outcome leaves Danny dead, Mike needing Jimmy’s help and the life-long friendship between Jimmy and Shawn in tatters.

Liam Neeson’s earlier career included powerful dramatic roles in films such as Schindler’s List and Michael Collins, but since Taken, his oeuvre has taken on a new sheen; almost without exception, the images from his films – from Non-Stop to A Walk Among The Tombstones to this – feature the rugged everyman hero pointing a revolver.

Neeson is now almost exclusively making a living from running around, pointing guns at people, fighting them, chasing them or running away from them. He has become a parody of himself.

Similarly, Run All Night is like a parody of low-life big-city crime-thrillers.

It feels like it’s been written by a committee of Hollywood script doctors, so formulaic is it, and it includes about 90% of the cliches in the book – including the father who wants to rebuild his relationship with his brooding son, to the gang boss trying to go clean (although still, it seems, surrounded by armed goons), personal differences tearing apart close friendships and the supporting character who’s expecting a child, eastern european gangsters, the most reliable and expensive hitman in the business (who has a red laser beam emanating from his weapon in a way that would be impossible for anyone, except – it seems – his targets to see) – not to mention starting with a dramatic moment towards the end of the film, before flashing back – in this case – sixteen hours.

Yet, despite it being predictable and feeling familiar at every turn, the only unexpected thing about Run All Night is that director Jaume Collet-Serra manages to make it exciting and thoroughly entertaining – in a “you know what you’re going to get” kind of way.

Perhaps one of the reasons that this film works far better than it has any right to is the fact that Neeson is clearly in his element, comfortable with many of his key collaborators – Non-Stop director Collet-Serra and co-star Holbrook from A Walk Among the Tombstones. High-powered cameos from Vincent D’Onofrio as the only clean cop in the Department and Nick Nolte as the disapproving brother – archetypes both – don’t hurt.