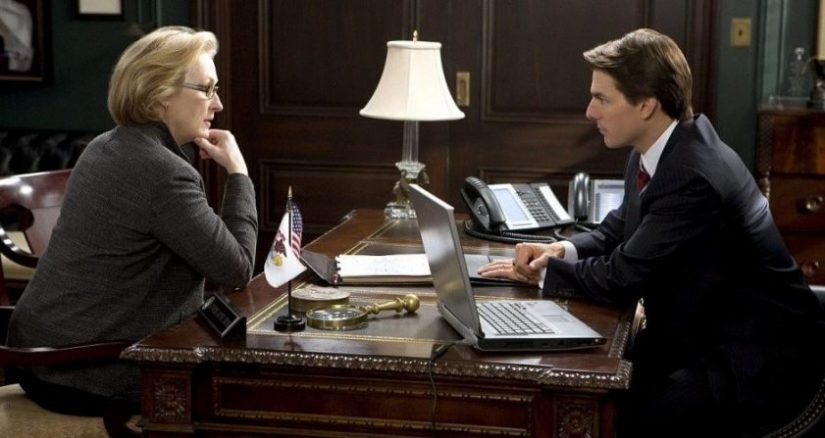 In the first, high-flying Republican Senator Jasper Irving (Tom Cruise) invites top TV correspondent Janine Roth (Meryl Streep) to his office to give her an exclusive on a new strategy to defeat the Taleban in Afghanistan. As a veteran reporter, she takes it all with a pinch of salt, asking probing questions – and making challenging accusations.

We cut to two young soldiers (Michael Peña and Derek Luke), taking part in Irving’s new military operation, contemplating their fate, lying face down in the snow, when things don’t go to plan.

Then we eavesdrop on an early morning consultation between the same soldiers’ former professor (Robert Redford) and one of his brightest pupils (Andrew Garfield), who’s become disheartened with his life and his studies and is threatening to throw away a bright future.

The three stories are intercut as opposing views on the war against terrorism, honour and responsibility are mused on by a range of characters at different stages of their lives.

For a film which is ostensibly about the war on terrorism – or at least attitudes towards it – this is oddly sedentary.

Other films might tackle such issues with extravagant battle-scenes, hoards of screaming protesters, passionate polemic and oration.

What we actually get is just three couples chatting – two sitting on chairs in offices (I think someone stood up once or twice) and the other pair lying on a snowy plateau, and to strip whatever slithers of cinematic potential away, this segment happens at night, so you can’t even marvel at any grand scenery in the background. This is particularly sad for Peña, whose previous high-profile role was doing exactly the same – he spent the whole of World Trade Center lying trapped in the dark, chatting to Nicolas Cage.

Lions for Lambs is so clearly intended for a stage – divided in three – with a spot-light flipping between them. Redford’s only hope of lifting it off the screen relies on the strength of the performances. Garfield’s character’s apathy necessarily numbs his performance. Similarly, Streep’s “seen it all” cynic doesn’t allow her to portray her usual range of emotions – the odd raised eyebrow or shrugged shoulder is all her character allows. Redford’s pontificating pacifist professor also shows little sign of life.

Only Cruise is able to inject any passion, enthusiasm and determination into his role.

Don’t get me wrong – powerhouse performers like this will always be worth watching, but they’re just not given anything to do – there’s not even anything for them to get emotional about. The film feels like it should be big and impressive – but it’s small and insignificant.

Much of the detail of the film doesn’t ring true – if a senator offers a TV network a scoop, he’d be going on record on camera – so why on earth does the editor send along his top reporter with nothing more than a notebook? And if she’s a veteran TV journalist, why do we see framed magazine articles bearing her by-line?

And as for the themes – tackling a subject as big as the “war on terror” as seen through the fight against the Taleban is hard to do without expressing an opinion, yet despite Redford’s well-known left-leaning political views, he manages to keep them largely bottled up.

Probably rightly – and necessarily – the film doesn’t tell us that this war – or indeed war in general – is wrong. Its main thrust appears to be that the only thing that IS wrong is apathy.

The film doesn’t come close to the levels of worthiness or importance it clearly sets out to achieve. I can’t even say that this overblown endeavour even feels like there was ever much ambition to the project.

Tom Cruise: “I’ve got a new way to beat the Taleban – and therefore protect the US.”
Meryl Streep: “Do you REALLY think that’ll work?”

Shots of the new way to beat the Taleban not really working.

There…that didn’t take an hour and a half.