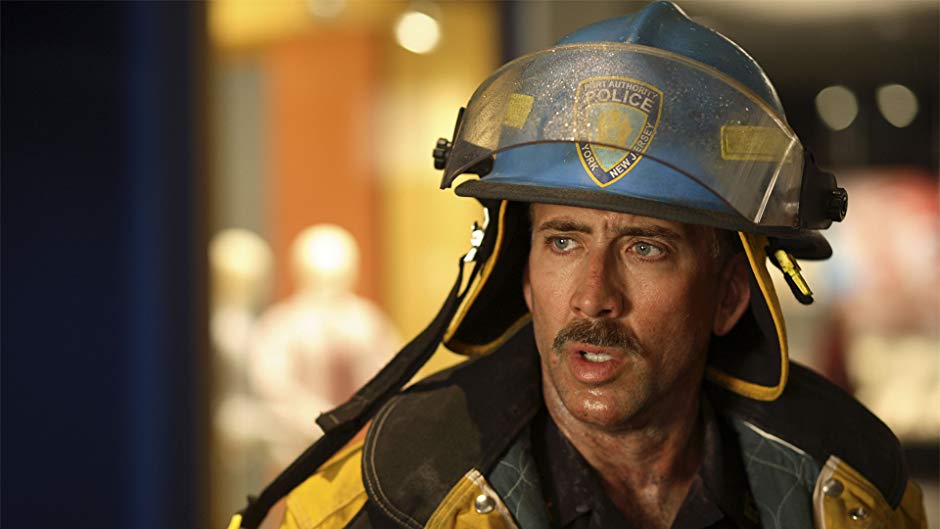 They arrive at police HQ to hear that a plane has crashed into one of the World Trade Center towers. Sergeant McLoughlin herds a team of officers, including Jimeno, into a police van and takes them to Downtown Manhattan to help with the inevitable rescue operation.

As thousands of screaming office-workers flee the building, McLoughlin leads his team of brave rescuers in the opposite direction.

But before they have time to pull out any survivors, the walls around them first shudder and then collapse. Most of the men are crushed in the rubble, but McLoughlin and Jimeno survive, trapped under tonnes of masonry, unable to move anything except their mouths and lungs.

“Don’t go to sleep,” is the only advice McLoughlin can give his junior colleague, on the understanding that to survive such a catastrophe, you have to stay awake.

Meanwhile, in the outside world, there’s growing panic among their families as they realise that their loved ones are missing in the collapsed towers, and a marine reservist Dave Karnes (Shannon) is so incensed by what he’s seen on the TV that he leaves his accountancy office, dons his military fatigues and heads to Manhattan to search for survivors at Ground Zero.

No prizes for guessing who he finds…

So this – essentially an apolitical two-hander, in a single location – comes as a bit of a departure.

Departures are by no means bad in the movie business, but in this case, it’s rather disappointingly bland, peculiarly uninspiring and lacking in any excitement.

No pontificating on who’s behind the atrocity. We don’t see any of the thousands who died, or their grieving relatives. We don’t even see the planes hitting the buildings. It’s basically two hours of watching two men, trapped under rubble, telling each other not to fall asleep, with occasional visits to their weeping wives.

The one thought-provoking element of this minimalism is that without exception, all the action that we know is going on remains unseen. The characters we are with experience a bit of rumbling and falling bricks – but we know what’s really happening, even though we don’t see it.

If it’s meant to be some kind of a study of the all-American hero, McLoughlin and Jimeno got trapped before they’d rescued anyone. They hadn’t done anything to help us get to know them – or care about them – before their world caved in on them, but I guess it’s the thought that counts.

Maybe Staff Sergeant Dave Karnes is Stone’s hero, but he comes across as the kind of gung-ho stereotype Stone would normally be pillorying.

Something I’ve discussed in previous reviews is my distaste for passive protagonists – as viewers, we like our main characters to be doing things to try to reach their goal and overcome their plight, so it’s just not that interesting to watch two people who can’t move a muscle, just lying there, moaning.

This is like the antithesis of the recent United 93 – another film about that same fateful day, told from a different angle. Rather than watching two failed heroes, lying under rubble and doing pretty much nothing else, United 93 showed us a group of heroes actively pursuing freedom, and indeed their lives, with every last sinew in their bodies – of course, they turned out to be failed heroes too, but not for want of trying. And watching them was exhilarating, while seeing the horror of the subsidiary characters as all the events of the morning unfolded made us relive many of the same emotions.

OK, so the film is well shot and acted, but you’d expect that from those involved – and much, much more.

It’s kind of ironic that the two leads in World Trade Center spend the whole film telling each other not to fall asleep: having spent two long, slow hours watching them in the dark, unable to move, I felt it might have been more useful for them to be telling us not to fall asleep.