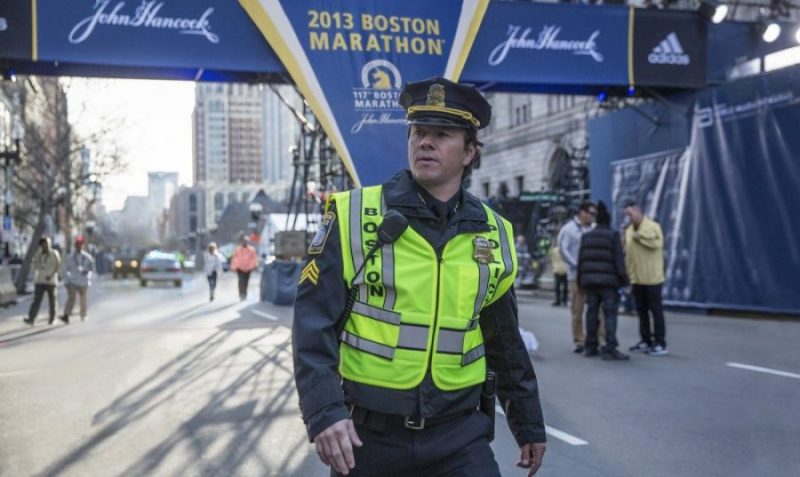 It is based on the 2013 Boston marathon bombing, which killed three people – including a child – and injured more than 260 others, and the round the clock citywide hunt that was launched to catch the bombers.

Peter Berg, who seems to be fast becoming the go-to guy to bring real life stories to the big screen, delivers a painstakingly detailed recreation, which is a moving and solid tribute to Boston, its indomitable spirit, its courage and to the way Bostonians united in the face of such adversity and terror.

It also provides a fascinating depiction of how the different law enforcement agencies worked together in a gripping race against time to catch the bombers before they struck again.

Drawing from real-life accounts, including those from the first emergency services on the scene, hospital workers, law enforcement investigators and survivors, and with the use of archive footage Berg’s powerful drama captures the panic, the horror and the tensions of that tragic day and its aftermath.

Many of the characters in the film are based on their real life counterparts with the exception of Wahlberg’s Sgt Saunders who is an amalgam of several actual police officers and law enforcement people.

Bostonian Wahlberg is at his most earnest as the ordinary guy turned hero, a role which he has now down pat, in this, his third collaboration with Berg.

Melikidze and Wolff deliver quite difficult but solid performances as the two terrorist brothers, one 26 the other 19 years old, who are depicted as misguided young men who had grown up in the US and as it transpired one had US citizenship and the other was in the process of acquiring his.

The fierce shoot-out between police and the bombers when they were cornered in Watertown seems very Hollywood-esque with all the explosions and fire power but according to Sergeant Jeffrey Pugliese, (played by Oscar winner Simmons in the film), who shot one of the terrorists and apprehended the other, what you see on the screen is exactly what happened. At a question-and-answer session, he revealed that was something that he demanded from the film-makers before he consented to be associated with the movie. He also stated how since the marathon bombing local residents are now more willing to report anything suspicious to the police than they were before.

It is the real life survivors who are given the last word as, at the very end of the film, many of them talk about that fateful day and show their grit and their determination not to be defined or be crushed by that horrendous attack.