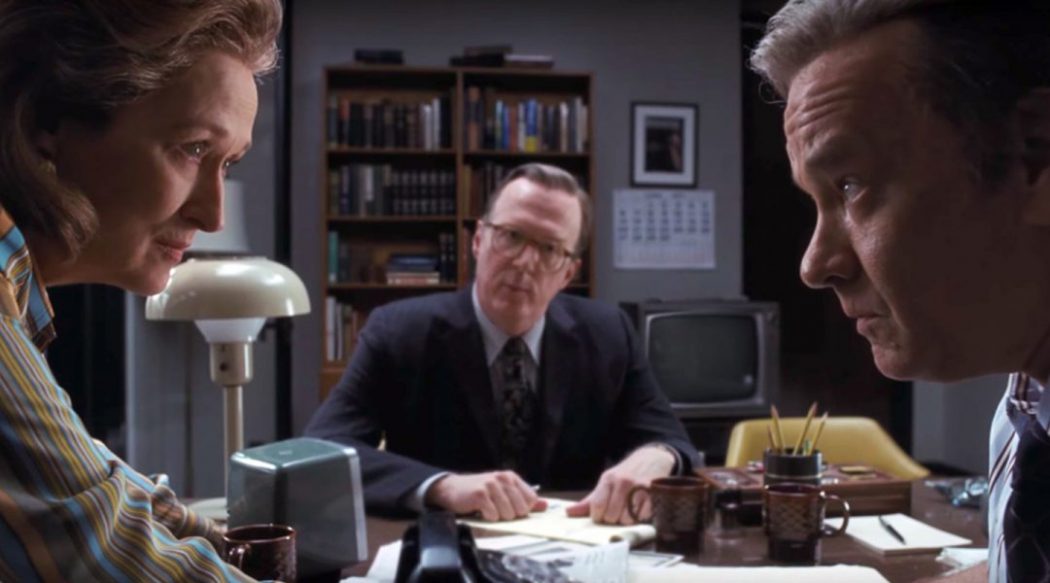 In the summer of 1971, disenchanted by what he’s seen on the battlefield in Vietnam, a military analyst, Daniel Ellsberg (Matthew Rhys) leaks thousands of pages of a top secret Defence Department report to the New York Times.

In an exclusive series of articles based on what became known as The Pentagon Papers, the Times reveals that successive administrations have sent young American men to their deaths, to fight a war that they knew they couldn’t win.

The Papers showed how Presidents had consistently lied to the people about the reasons for the conflict and the progress of the war.

At this stage, you might be wondering why this film is called The Post, rather than The Times…

So…desperate to jump on the bandwagon, the editor of a small local paper, the Washington Post, Ben Bradlee (Tom Hanks) tries to persuade his publisher – one of the few women in the business Katharine Graham (Meryl Streep) – to let him run with the stories, but he doesn’t yet have a copy of the report. She’s more interested in guiding the paper through a successful flotation on the stock exchange, to raise enough money to keep it running.

President Nixon is worried about how the flurry of bad press might reflect on his own administration and orders the courts to stop the Times publishing.

When one of his own journalists, Ben Bagdikian (Bob Odenkirk) delivers another copy of the report, Bradlee sees his chance to trump the New York Times and start publishing his own stories, while his competitor is judicially paralysed.

But getting hold of the Pentagon Papers is only the start of his problems – as well as persuading Katharine Graham to let him run with the stories, he has to fight off objections from the Post’s lawyers and the board, who are worried that antagonising the President could jeopardise the paper’s flotation.

Bradlee’s job – and liberty – are on the line. But as Bagdikian tells him, “the only way to assert your right to publish – is to publish.”

There’s much about this four-decade old tale that feels surprisingly fresh – there’s another President in the White House who, like him or loathe him, is at war with the mainstream media, and there’s a male-dominated media, struggling to make sense of a powerful woman.

But much of it also feels disappointingly familiar; as recently as Spotlight and as far back as All The President’s Men, we’ve seen films about journalists exposing scandals at the highest levels – in the latter case, it’s even the same editor at the same paper – but somehow, this tale doesn’t have the excitement, the peril – or even the journalism.

While its predecessors featured fine journalists, mining contacts and digging for the truth, here we see very little journalism; as the film begins, the Pentagon Papers have already been leaked to the New York Times, which has already put some of the revelations into the public domain. So our protagonists at The Washington Post aren’t digging so much as they’re playing catch-up. One of the journalists scurries around, trying to get hold of the report – that’s already been leaked to another paper – but from then onwards, the reporters aren’t digging around for stories, they’re just reading a report that’s just been handed to them and hoping to get away with publishing details while its bigger competitor is being silenced by the courts.

This is as much a film about a small local paper trying to make a name for itself on the national stage to compete with a higher profile rival as it is about journalists exposing decades of government malfeasance.

And while the journalists are busy reading the report that’s been leaked to them, the plot is largely about editors and publishers discussing the morality and legality of printing their stories with lawyers and judges.

Taking even more away from the drama, because Spielberg uses genuine recordings of Richard Nixon ordering a clamp-down on the media, we never properly see the main antagonist, so most of the drama comes not from the enemy without but the enemy within – executives on the newspaper’s board warning the boss that publishing could jeopardise its flotation on the stock exchange. When it’s just emerged that successive governments have been lying to voters for decades to justify sending young men to their deaths in a war that they know they can’t possibly win, the threat of a newspaper having to call off its flotation is hardly the biggest draw for cinema viewers.

There’s no question that Tom Hanks and Meryl Streep turn in exactly the quality of performances you’d expect from two of Hollywood’s contemporary greats and the enthusiasm and dedication of their staff – in particular Bob Odenkirk’s honourable Ben Bagdikian – is admirable, while Bradley Whitford and Tracey Letts deliver suitably smarmy turns. But to what end?

There’s an important story to be told here, but Spielberg and his team seem to have missed it.

Rather than treating us to an editor and a board member trying to persuade their boss of the merits of their arguments about whether or not they should try to publish stories that their rival has been banned from printing – rather than watching a small paper deciding whether to try to capitalise on the judicial paralysis of its bigger rival, perhaps a more exciting story might have been about what drove the source to leak the report in the first place and it might have been more interesting to see a film called The Times, following what was going on at the New York Times ahead of it breaking the exclusive story that shook the world.

Perhaps the main element in favour of concentrating on Ben Bradlee at the Washington Post is that it allows for a coda that throws ahead to his paper’s own exclusive that exposed the scandal that would claim the biggest scalp of them all, just three years later.