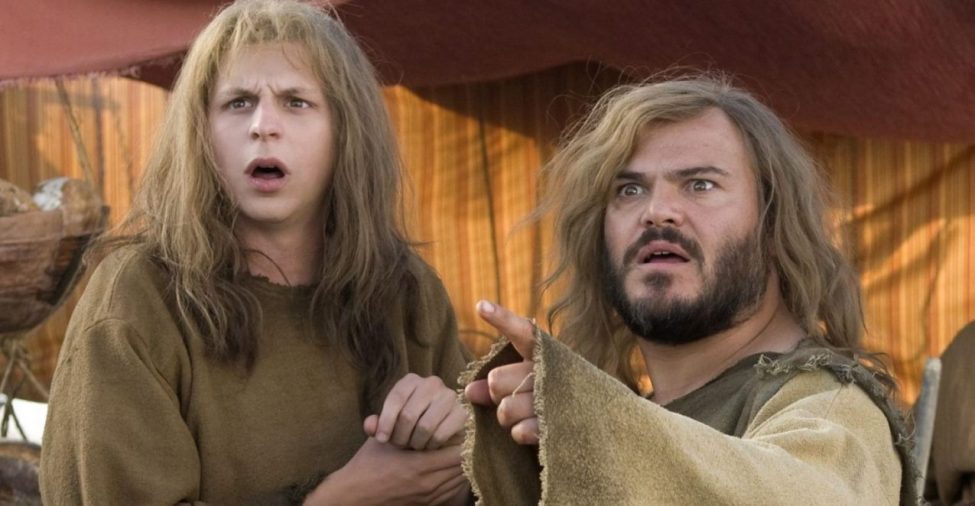 Back in prehistoric times, men had to be hunter-gatherers to thrive, apparently. So if you were just one or the other, you’d never find the woman of your dreams.

Well – at some unspecified point after prehistoric times – Year One, I’m guessing – hunter Zed (Jack Black) is exiled from his community when he brings a curse on his village by eating from the “tree of knowledge.”

His closest approximation to a friend, gatherer Oh (Michael Cera), ends up going on the run with him.

Outside the safety of their village, they head off on an adventure into the big wide world, encountering a range of familiar characters – including farming brothers Cain (David Cross) and Abel (Paul Rudd) – and we all know what happens to them.

When Cain is accused of killing his brother, he ends up going on the run with our heroes and next they stumble across an old man Abraham (Hank Azaria) who’s about to sacrifice his son Isaac (Christopher Mintz-Plasse).

But it’s in the nearby city of Sodom where their adventure really kicks off, when after an apparent miracle or two, the king (Xander Berkeley), the high priest (Oliver Platt) and the loves of their lives from their home village begin to wonder if Zed is – as he claims – “the chosen one.”

On one, simplistic level, this is an underdog-comes-good story.

On another, it’s a desperate attempt to be a satire on religion, hoping to do for the Old Testament what The Life of Brian did for the New one.

But whereas Monty Python’s assault on organised religion was as razor sharp and close to the bone as it was drop-dead hilarious, the promising pairing of Jack Black with Harold Ramis falls disappointingly flat, with the satire being broad-brush obvious and the funniest moments coming from puerile poo jokes and infantile gay gags.

When you think of Year One, the Jesus story comes to mind, so in the context of this film, it presumably refers to the Jewish calendar, but of course, it’s all rather anachronistic in that sense anyway, condensing several generations of the old testament into a couple of weeks.

The cast includes some of the best comic actors working today — from Jack Black and Michael Cera to Hank Azaria, the unsung David Cross (familiar to some as Tobias in Arrested Development) and the geek-de-nos-jours Christopher Mintz-Plasse – but they’re all clutching around for something to exercise them; sadly, Ramis fails to deliver on the promise, prompted by his previous screenplays — from Ghostbusters to Groundhog Day.

The film seems to be oddly misogynistic too, with no high-profile women in the cast and every female character being a shallow caricature.

Perhaps the most fun the audience will have in this film is trying to recognise some of the supporting actors, hiding behind false beards, long wigs and comedy voices.