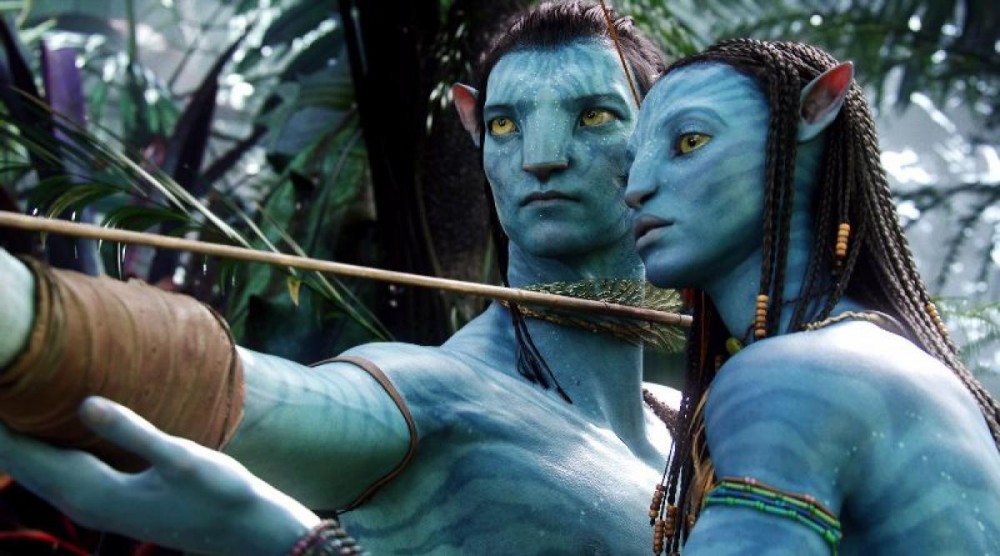 A war wound has left marine Jake Scully (Sam Worthington) paralysed from the waist down, but when his twin brother dies, he’s roped in to take part in the scientific side of a highly dangerous mission on a remote planet, Pandora.
Running the show is Parker Selfridge (Giovanni Ribisi), whose goal is to mine a valuable mineral, called unobtanium, from the planet. The only problem is that the highest concentration of the mineral is directly beneath where a tribe of natives, known as Na’vis, life.
While Parker would be happy to let the military blast this giant, blue-skinned humanoids off the surface of their own planet, he’s happy to let Dr Grace Augustine (Sigourney Weaver) have a go at moving them on peacefully first. She’s come up with a way to fuse the DNA of humans with the Na’vi to clone Avatars, which are, essentially, Na’vi bodies, inhabited by the spirit of those whose DNA was used – hers and Jake’s twin – hence why Jake is called on to take part.
When the pair go to sleep in their futuristic pods (it is 2154 after all), their souls enter the Avatars and in their new bodies, they set off on their mission to befriend the Na’vi and persuade them to move the community away from unobtanium mine.
But there are some catches. If someone wakes them up, their souls return to their human bodies and the Avatar’s just faint in front of the Na’vi. And secondly, no-one counts on Jake Scully going native.
Before long, he’s fallen for a Na’vi woman (Zoë Saldaña) and decides that he can’t let the humans kill the natives and destroy the habitat to milk the land of its minerals.
But can one man – and his new friends – even if they ARE ten foot tall – defeat the mightiest army planet earth was able to send up to take them on?

James Cameron is responsible for some of the biggest (Titanic) and most revolutionary (Terminator 2) films of the past two decades, but he hasn’t made a film for twelve years – because he’s been working on this one.
In a sense, he came up with the idea and he’s been waiting for the technology to catch up.
Where available, this film can be seen in 3D – and in a handful of locations, in IMAX – and while most recent 3D films wouldn’t really be diminished much by losing that third dimension, this really is a film that’s worth paying the extra £2 for.
The story itself is by turns intricate and simplistic, dark and bright, flippant and worthy, original and overly familiar – and ultimately serves as little more than a metaphor for possibly the Americans moving into Iraq for the oil, the British pushing the Native Americans off their land – or possibly, more simply, he’s suggesting that having destroyed our own planet, we’ll have to find others to pull apart.
Once we get past the initial conceit of the cloned Avatar, controlled by the sleeping human, there are very few fresh themes here, so in truth, its chief entertainment value is marvelling at its technical wizardry.
The blending of the real life humans and their environment with the animated Na’vi and theirs is seamless – you’ll totally believe that ten foot high blue humanoids with pointy ears and a tail are interacting with humans half their size – both as friend and foe – and the equine equivalents and pterodactyl-like flying creatures are equally convincing.
And a must for every 3D film – bullets flying out of the screen towards the audience – just ram home the technology Cameron’s put a decade of his life into.
In many senses, it’s the Star Wars of its age – showcasing groundbreaking technology to tell a story about people like us interacting with people very unlike us – in a galaxy far far away.
Elements of this feel like a cross between a David Attenborough documentary and a sociology lecture – it’s not only humans that build communities – but other parts of the Na’vi culture are a little harder to take – as a linguist, I’m always slightly uncomfortable with made-up languages.
It’s a shame that the story-telling isn’t better – I hope that Cameron acknowledges that most of his effort has gone into the more successful visual elements of a film than the plot. But sometimes a film is worth seeing just to feel absorbed by another world – don’t worry about getting drawn in on an emotional level – just enjoy the visuals, the effects, the creatures – this is a film where it’s worth paying a little extra for the extra dimension.