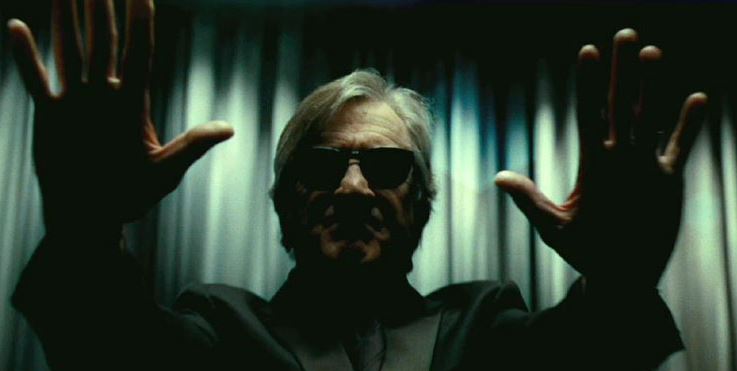 Margaret Matheson (Sigourney Weaver) is a psychologist who debunks fraudulent psychics – a modern-day American version of Rebecca Hall’s Florence in The Awakening, if you like.

She’s generally shunned by the scientific community, that – in this world – has a tendency to support the notion that some people have paranormal powers.

Margaret’s assistant Tom Buckley (Cillian Murphy) is a talented physicist in his own right, but works for her because of a bad experience he’s had with a faker in the past.

When they’re not catching out fraudsters, the pair spend their time lecturing undergraduates on how to keep their scepticism alive, while their university directs all its funding towards the research of the believer, Paul Shackleton (Toby Jones).

When the world’s most famous psychic, Simon Silver (Robert De Niro), comes out of retirement, Tom is determined to prove that he’s a fraud, but Margaret warns against challenging a man who’s already damaged her own reputation.

Just to belittle Margaret and Tom even further, Silver has agreed to submit to experiments led by Shackleton.

Can Margaret and Tom prove that Silver is a fraud before Shackleton declares his powers to be scientifically proven?

It’s hard to know what to make of this film.

It’s set up to be a psychological thriller – a battle of wills between a self-proclaimed psychic and two sceptics, determined to prove he’s a fraud – but it’s directed as a horror, with things going bump in the night in long, dark corridors.

It’s also set in a rather peculiar world – it looks like ours, but so-called scientists are rewarded financially if they believe in paranormal phenomena while sceptics are regarded as quacks by the scientific community. This world also seems to regard suggestion – such as hypnosis – on a par with psychic abilities, while in our world, we see Derren Brown make people do things they wouldn’t otherwise do and don’t for one minute attribute this to the supernatural.

And that’s the next big problem with this set up – these guys are stage performers. In our world, we get the likes of Derren Brown or even Paul Daniels filling theatres to dazzle their audiences with magic and the power of suggestion while faith healers fill churches to cure them through the power of Jesus. Believe what you like, but in our world, Paul Daniels wouldn’t end up in jail for claiming that he’s cutting a woman in half, yet the so-called psychics in this world find themselves on the wrong side of the law.

Then, in its attempt to debunk the frauds, this film sets out to show us how they operate, but while it considers the obvious tricks that we all know – having stooges in the crowd collecting information that’s fed to the performer through an ear-piece or correctly “guessing” what’s on a card by looking at the reflection in the tester’s glasses – it fails to consider how Simon Silver performs psychic surgery or indeed how he flies – that says, David Copperfield famously did this and didn’t end up behind bars for using trickery.

Such unexplained moments feed into the creepy undertones of the film, but the antagonists use brute force rather than cunning to try to cover their tracks, which takes any magic out of the film.

And there’s far too much cheesy cliche, not least Silver claiming “I’m hard to find,” while a handful of low-lives are lined up in the corridor outside his skid-row hidey-hole, waiting for their consultation.

And the integration of two psychology pupils – Elizabeth Olsen and Submarine’s Craig Roberts, woefully wasted – feels like nothing more than trying to fill out the poster with more names.

This film comes from the mind of the director who brought us Buried in 2010 – a tremendously imaginative low-budget thriller in which Ryan Reynolds spent the whole film buried in a crate under the Iraqi desert. That film was hugely brave and ambitious, but let down by its narrative nonsense.

There’s more of that in spades here – it’s slick and ticks many boxes for genre fans, but it’s corny, convenient, contrived, incoherent and will annoy anyone who puts as much thought into trying to decode it as the protagonists put into debunking their foes.

And for what? What’s actually at stake? Pride? Money? Academic acclaim? The film doesn’t actually tell us why Tom is prepared to risk everything to expose Silver.
It’s a potentially promising premise with a parade of powerful performers but it’s left floundering in its own confusion and lack of direction.

An attempt at a twist in the dying moments only leaves you in even more doubt about whether the director has any idea what he’s trying to say.

If Cillian Murphy shouldn’t be jailed for claiming to be a physicist who exposes paranormal fraudsters, when he’s actually just an actor, Rodrigo Cortés should be punished for purporting to be an imaginative and original film-maker, offering us so much, but delivering so little.