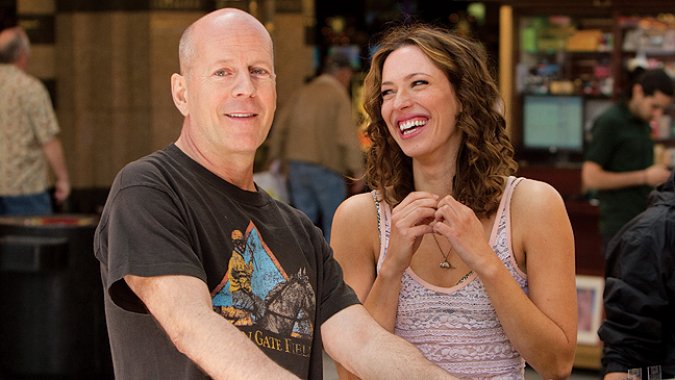 Serving drinks at a big casino is her aim, but a fellow resident of the cheap motel she checks into links her up with a high stakes sports gambler, Dink (Bruce Willis) who needs an assistant. His jealous wife Tulip (Catherine Zeta Jones) is a little less enthusiastic about the cute young new arrival.

Ditsy as she is, Beth has a head for figures and settles into her new job well – so well, in fact, that Dink wants her around more than Tulip can handle and she makes him get rid of her.

A woman like Beth, of course, is in demand, and it’s not long before Dink’s New York friend Rosie (Vince Vaughn) signs her up to help him out – but while it’s all legal in Nevada, the New York authorities don’t look so kindly on their gambling.

The fawning attention of clean-living, dog-loving Jeremy (Joshua Jackson) in the background adds to complexity of Beth’s life as it takes her in a completely unexpected direction.

But that’s gambling for you.

Stephen Frears is a highly respected British director, known for such enduring classics as My Beautiful Launderette and The Queen, more mainstream crowd-pleasers such as The Grifters and High Fidelity and arthouse sleeper hits including Dirty Pretty Things.

So he can do big and he can do small, both in terms of budget and ambition.

So where does that leave Lay the Favourite – his adaptation of a memoir by the real-life dancer-turned-gambling-sensation Beth Raymer?

It’s certainly on the small side of his work; with a small (in terms of numbers, rather than stature) cast and few locations, it could almost be a script straight out of a guide to making low-budget films. But his cheaper films used to have a point.

Following on from Chéri and Tamara Drewe, one might conclude that Frears is now more interested in making lighter fare.

Lay the Favourite zips along at a pleasing rate, but nothing much of note really happens – Beth moves to a new city, gets a new job, befriends some people but alienates others, gets another job and that’s about it.

It’s not an exposé of the dark depths of the gambling industry – in fact, unless you understand the workings of sports betting, you see a lot of gambling going on but don’t really get much of a sense of what any of it means.

All you know is that Beth surprises herself and those around her with her capacity to work the numbers – betting is almost a maguffin – it’s a film about a woman trying to better herself and gambling is just the tool she happens to use to do it.

But while she betters herself, in terms of having more money and respect, she doesn’t particularly become a better person, in the traditional sense of such films. She discovers that she can do something she didn’t know she could do. And? It’s also not entirely convincing that a stripper from a small town, with ambitions to be no more than a cocktail waitress, would unknowingly harbour such mathematical skills – equally, it feels corny that we’re being told this ditsy bimbo has a brain at all, let alone one that would make Raymond Babbit jealous. In a sense, it’s just another take on the “tart with a heart” stereotype.

Bruce Willis and Catherine Zeta Jones do what’s asked of them, although not much is asked of them. A good-natured middle-aged gambler who enjoys the company of a fresh young assistant dismisses her to keep the peace with his insecure ageing beauty of a wife. He’s perfectly likeable but a little underwhelming. She’s a caricature.

Then there’s Vince Vaughn as the only character, aside from Beth, who has any energy – he’s fun, but doing nothing new.

Lay the Favourite is not bad, but it is bland.

It feels much more like a group of friends getting together one weekend to do something casual, rather than a film that’s had too much effort put into it.

Making this rather harmless but pointless independent film is a gamble that didn’t quite pay off.