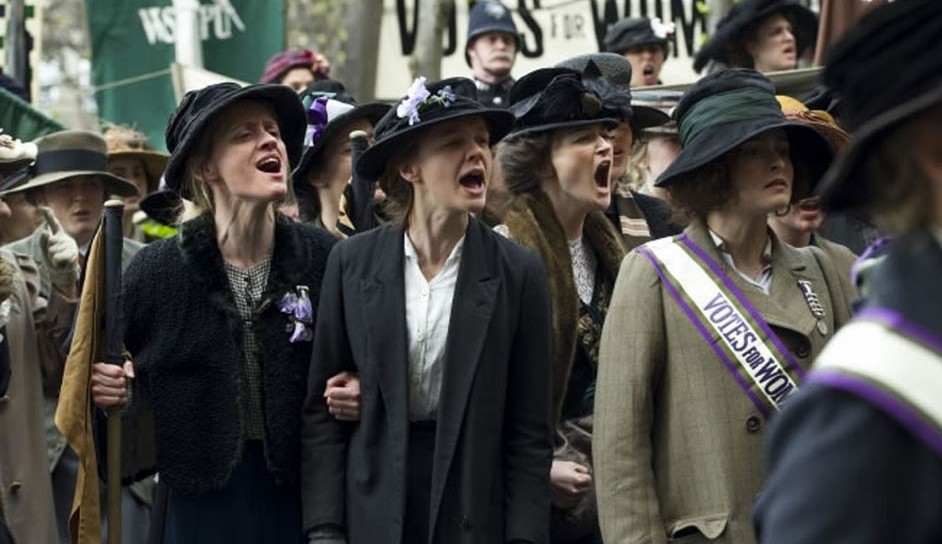 In early 20th Century London, Maud (Carey Mulligan) works in an East End laundry, where she’s worked for years, having little choice but to put up with the sexual advances of her sleazy boss, despite being married to a somewhat meek colleague, Sonny (Ben Whishaw), with whom she has a young son.

When she’s sent on an errand by her boss, she witnesses a group of women throwing stones through shop windows, shouting “Votes for Women;” the Suffragette movement divides the women at the laundry – some are content with the status quo, some want more rights, but peacefully, while others argue that until the law respects them, they won’t respect the law.

One of her colleagues, Violet (Anne-Marie Duff), is a fully signed up, card carrying member of Emmeline Pankhurst’s (Meryl Streep) suffragette organisation, the Women’s Social and Political Union, whose stunts are becoming more and more headline-grabbing as the police, under Inspector Steed (Brendan Gleeson), are doing their best to keep them under control.

Violet tweaks Maud’s interest in the movement, and soon she begins to give in to the pull of the women and the push of the men in her life, until there’s no going back.

On one level, this is a riveting and thoroughly compelling drama of a woman who is prepared to put everything on the line for the biggest cause of the age. But on another, it’s a film about the wrong woman; this is not a real-life story about a real-life woman, but a fictitious suffragette, finding her place in a struggle that is so much bigger than her – a struggle in which she is little more than a bystander, literally.

Given the historical significance of the suffragette movement, you might think that there were enough real-life participants whose stories might have been worth telling. Emmeline Pankhurst herself? Or perhaps Emily Davison (Natalie Press), who – without spoiling anything for those who haven’t studied the period – is, to this day,  seen as one of the women whose actions actually prompted change.

There is, of course, a question over whether it was the action of the Suffragettes that finally led to change or whether women’s enfranchisement was, in reality, more a consequence of the impact of the First World War on the younger generation of the UK’s population. The first women were granted the vote after the war, a full five years after the events depicted here, during a period that the Suffragette movement was largely inactive.

Telling a fictitious story against an historical background, the film-makers (from the director, writer and producer to the leads and most of the supporting cast, all women) understandably follow their drama at the expense of the bigger cause, such that there’s no explanation of what happened – other than the War – between the end of their story and women being granted some voting rights. And there lies another issue, for those hoping to learn about the issue at the film’s heart; while women didn’t have the vote at the time that’s depicted, neither did nearly half of men (quite possibly including Maud’s working class husband, living in poor-quality accommodation) – and it would, in fact, be another ten years after the first women were allowed to vote, before women were granted voting equality, and the Suffragette movement had long-since wound up, before that development.

However, fictitious as the story is, there’s certainly enough that feels authentic – from the treatment of women to the often shocking actions of the Suffragettes, to themselves and others. And as Sarah Gavron’s effective and passionate direction ratchets up the drama around Carey Mulligan’s Maud, it will make most viewers angry about the way the country was, a little over a century ago – it will make many men ashamed to be men, although another historical omission – and that’s not to say that a fiction should be required to include particular facts – not all men were selfish misogynists; in fact many of the political thinkers behind giving women the vote in the first place were men, as were many of those fighting hard against the establishment, alongside the suffragists, both violent and peaceful.

Instead, in this film, it’s simply black and white; men – evil, women – angels, victims and fighters. All of which works perfectly well in the context of a fiction, deservedly driving anger in the fight to right wrongs, but it’s historically misleading, if you want anything more than a rough sense of how the political system began to embrace the other half of the population, which makes the narrative feel somewhat arch.

And, perhaps, moot; there will be those who’ll argue that while progress has undoubtedly been made,  a hundred years on, there’s still a long way to go. And that’s despite another barrier being broken, five decades later, as depicted in the similarly framed Made in Dagenham – another fictitious heroine fighting for women’s equality as part of an historical campaign.

Having said that, Suffragette doesn’t have quite the same social punch as the more recent Selma, which highlighted a real, more recent civil rights struggle, as America’s black communities were fighting for the vote, only fifty years ago – with that film coming out at time when the news was seemingly filled with white police officers shooting dead unarmed black men.

And as if to simplify the drama even further, apart from a single quote from a House of Commons debate in the opening line of the film, there is no attempt to explain why there was any resistance to an idea that now seems so fundamental to us – after six decades of a highly influential Queen, during whose reign the franchise was updated twice and who was even on the throne for the first few years of the campaign for women’s suffrage, why was it so difficult?

Suffragettes has been praised by supporters of diversity in the film business because it was written, produced and directed exclusively by women and the key cast, necessarily for the story, were women too. But the whole point of diversity is to represent society more fairly and swinging the pendulum too far the other way, while – perhaps – giving men a taste of their own medicine, no more makes for a rounded piece of film-making than something that’s aimed squarely at teenaged boys.