The Cannes Food Police were already shaping my day, before I even reached the Palais this morning. I was halfway to the early morning screening when I remembered that security at the Grand Theatre Lumiere would confiscate whatever snacks they found in my bag. The dry food could go in my pockets and evade both the eyes and the metal detectors of the Food Squad – but no such luck for the chocolate bar; I hadn’t intended a Toffee Crisp to be my breakfast, but I had little choice. 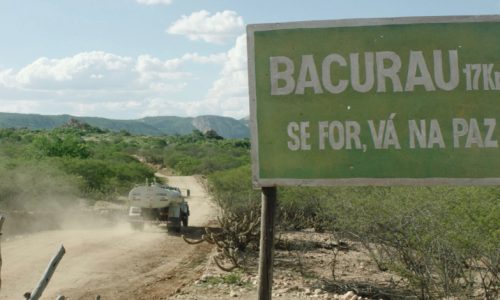 Only in Cannes would an 8.30am screening of a Brazilian film, with English subtitles in a strap below the screen, blocked by the heads of those in the row in front, be full – but at a festival full of faithful enthusiasts, not even last night’s parties can keep dedicated lovers of cinema away. But when the Palme d’Or nominated film turns out to be something like Bacurau, many people might wish they’d caught a few more winks back at the apartment – or even in the comfy cinema seats. Much like yesterday’s films, this genre defying curiosity was packed with interesting moments and thought-provoking ideas but left any coherence at the side of the road with the coffins that had fallen off the lorry in the opening scene.

Set in  the remote, Northern Brazilian village of Bacurau, a group of locals realise that they no longer appear on the map – any map. At around the same time, they start coming under attack from mystery gunman, interested first in disrupting their lives and later with ending them. So far so promising as the scene is set for what looks like being a fascinating glimpse into Brazilian local politics – including another reference to the recurring theme of climate change – by way of surreal thriller that pits hunters against hunted. But tension is reduced by revealing the antagonists a little too quickly – and then failing to make any attempt to establish their motives, so any effort work out what’s going on is likely to be punished, rather than rewarded. There is some entertainment to be had in the delight the film takes – with more gore even than yesterday’s zombie film – in adding an element of revenge to the plot. Just when it looks like we’re learning a little something about a key antagonist, the whole narrative strand is completely undermined. And who is his paymaster? There would seem to be no reason for plumping for the obvious answer, but no alternatives are provided. With little clear purpose for the antagonists – except a shared passion for inflicting random pain and death – the promise rapidly evaporates to leave a confusing picture that cannot be solved by any logical thought process.

It had its moments, but when viewed as a Competition entry for one of the most prestigious awards of the film calendar, it felt a little disappointing. What came next was bound to be more entertaining – and controversial.

At the UK Fillm Centre, Ken Loach, his regular writer Paul Laverty and permanent producer Rebecca O’Brien were talking about their latest Palme d’Or contestant, Sorry We Missed You. With no-one having yet seen the film, whose premiere was still a few hours away, the conversation dealt less with the plot itself and more with some of the peripheral issues. The moderator of the debate cheekily, perhaps, opened by asking why the team were back again, having supposedly retired, twice. This film – which touches on the issue of zero hours contracts in the gig economy – was described as being a companion piece to their previous Palme d’Or winner, I, Daniel Blake, which tackled controversies within the benefits system.

“I, Daniel Blake, shows how hunger is used as a weapon against vulnerable people,” Loach began, before concluding, “Poverty is not restricted to those who are not working.” This, he says, is a film to comment on what he called the “huge issue of inequality” that he argues is rampant even within the world in which he works. “All of the industry is based on young people working for free. Ours is a wicked industry for exploiting young, vulnerable people. People would give their right arm to work in this industry,” he joked, looking down at his own arm in a sling, as he recovers from a tendon injury. “People take advantage of that and then show them the door when they’re done with them,” he bemoaned, urging everyone in the industry to join the union.

After Laverty had turned his ire on the wealthy, naming the Amazon boss Jeff Bezos as a particular example of inequality when compared with Amazon’s delivery teams. Loach returned to what’s increasingly become the issue of this year, climate change. “How sustainable is it that everything is delivered to you individually in a vehicle filled with fossil fuel?” he asked. “And then you send it back again anyway,” joked Laverty, in a rare moment of levity.

It’s probably safe to say that Amazon won’t be funding any Loach projects in the near future and listening to the way that the three of them said they were constantly talking about politics and occasionally, subjects gelled together and formed the basis of a script, it seems similarly safe to say that two films into his retirement, a third won’t be far behind. Not least because there’s still plenty of anger in Loach’s heart; in this discussion alone, he spoke about the exploitation of young film industry workers, the gig economy, inequality and the fact that the government “hasn’t budged an inch on benefits” despite the furore raised by I, Daniel Blake.

There were also some interesting and unexpected areas of contradiction or disagreements on the panel. While Loach insisted that “cinema belongs in the cinema,” Laverty acknowledged that streaming services enable those who are struggling – like characters he writes – far cheaper access to films. Loach himself attacked the notion of what’s known as the possessory credit of a director – Un Film De – saying that anyone who uses this is “either a total genius or has an ego as big the Palais (des Festival),” before going on to note that “There has to be an individual eye – a unity of intention.”

But perhaps the most surprising disagreement came over Brexit. Rebecca O’Brien, whose funding often includes co-production money from EU countries told me three years ago, a month before the referendum, that it would be “bonkers to Brexit” and she hasn’t changed her mind. She acknowledged that most co-productions would still be possible after Brexit in theory, but said that in practice, it was already scaring people away and she stressed that it was “better to be with your neighbours than against them”. Loach, though, had a different view. “Let’s be good neighbours,” he began. “But let’s change the bloody thing. It prioritises the profits of big corporations over the welfare of its citizens.” And he noted that many of the bad things that he has been worried about, such as inequality and climate change – have happened while the UK has been a member of the EU. He then shuffled in his seat and apologised for what the called his “personal rant.” Perhaps Loach’s next film might be about Brexit!

As Loach, Laverty and O’Brien left the packed UK Film Centre, so did most of the crowd, leaving the largely empty venue to revert to what it does for most of the time, acting as a meeting place – both intentional and accidental – for British industry insiders. One such film-maker this year was a young writer-director from Darlington, Matthew Fearney, recently graduated in film from the University of York. He’s in Cannes to network and spread the word to help him fund his debut feature, The King of Spades, which he described as a drama about friendship and being young in the north of England. Explaining what was unique about his story, he noted, “Not many films have been made about the period between being a teenager and a proper adult.”

Much of my afternoon was taken up not seeing films or pursuing my own journalistic endeavours but by helping a colleague film a couple of interviews for his TV coverage of Cannes, among them, Monia Chokri, the director of last night’s opening film of the Un Certain Regard category, La Femme de mon Frere.

The payback for this was a ticket to the hottest Cannes event of the night, the after-party for the Elton John biopic Rocketman. I’d been toying with the idea of just nipping in for half an hour and then trying to get back from the Carlton Beach Club to the Palais to catch the late screening of Ken Loach’s Sorry We Missed You, so that I could retrospectively put many of this lunchtime’s comments in context. Some people might balk at the idea of leaving a Hollywood-style party on the beach after only about half an hour, but in all honesty, once you’ve eaten vast quantities of tuna, salmon, pasta, beef – other options are available – and ravaged the typically extensive dessert, and washed it down with a couple of glasses of champagne – real champagne, none of that Cava stuff – how much more can you eat or drink? The only thing that could stop me heading to see the Ken Loach film would be if Sir Elton himself popped up and started singing. Sir Elton himself popped up and started singing, as a black curtain hung across the pier was removed to reveal his piano waiting behind it. After a rendition of I’m Still Standing – sitting – he was joined on the stage by the man who plays him in the film, Taron Egerton, who sang the song of the title, Rocketman.

“It’s been an emotional night for me,” choked Sir Elton, having come straight from the world premiere of the film, which receives its UK release later this month. “Even if it doesn’t make any money,” he stressed, earnestly, “It’s the film I wanted to make.” And he had nothing but praise for Egerton’s performance. “When I see the movie, I don’t see an actor. I see myself.”