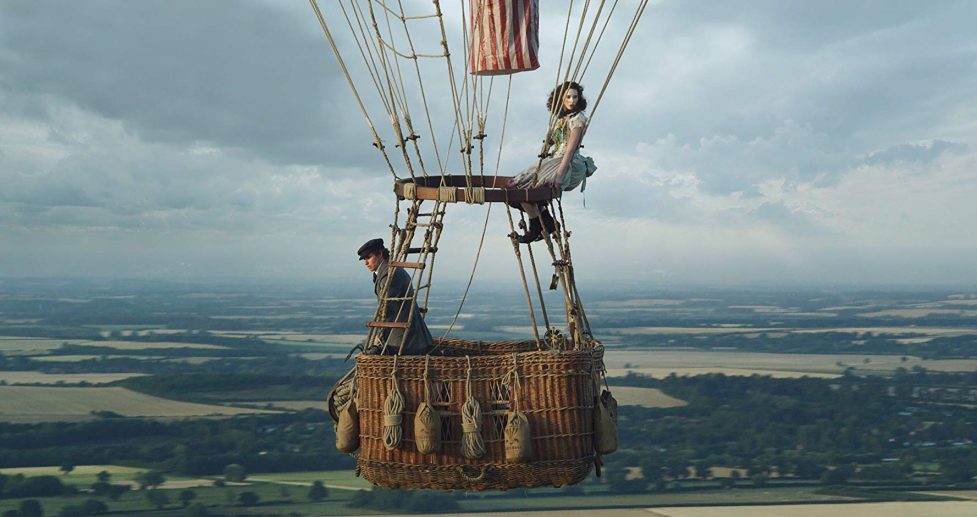 It’s 1862 in London. Two people are attempting to fly higher in a balloon than anyone has ever flown before.

Amelia Wren (Felicity Jones) is a renowned balloon pilot and entertainer and James Glaisher (Eddie Redmayne) is a respected scientist, wanting to get high enough to test new equipment to develop techniques to predict the weather.

With very different goals from the trip, this unlikely pairing get off to a frosty start, but when things get literally frosty, they have to work together to ensure they both get back to earth safely.

Nearly five years after Eddie Redmayne and Felicity Jones first appeared on screen together in the Oscar-winning The Theory of Everything, they’ve both being going up in the world, and here, that phrase can be applied literally.

The vast majority of the film features the pair doing just that – going up in the world.

She spends much of the early part of the journey making light of his scientific experiments as he’s trying to invent weather forecasting. But the higher they go, the more challenges the trip poses until their very lives are at stake and only heroic antics can save the day – clambering up the side of the balloon, among other things.

There’s a simmering sexual tension between them that in any other film would herald a relationship before the credits start to roll, but her marital situation make this notion oddly uncomfortable even to consider.

The action in the balloon is interspersed with what’s happening on the ground – mostly people looking through telescopes to see if they can see them – and flashbacks – of how the protagonists came to be in the balloon in the first place.

Much of their backstories are either unconvincing or they’ve had the drama stripped out of them by what we already know; when we’ve already seen James Glaisher up in the balloon, we don’t learn much from a flashback, seeing him coming up against resistance from fellow scientists when he begs them for funding to take the trip.

Most of these supporting characters are at best pointless and at worst useless – including Glaisher’s best friend (Himesh Patel) and Wren’s sister (Phoebe Fox).

And in another scene of kamikaze cinema, one of the characters sleeps though one of the most riveting moments of heroics imaginable, and as if to highlight what foolhardy film-making this is, on waking up, says something along the lines of “I know you must have done something amazing, so thank you for that.”

Reuniting the writer and director of The Scouting  Book For Boys, the lazy writing and clunky narrative is somewhat disappointing, but however hard they try to destroy their own film, the wide-shots of the balloon floating silently through the clouds and the action set-pieces are so enthralling that almost everything else is excusable.

It’s a shame the film didn’t simply run from the moment the protagonists took off until the moment they returned and forget about everything that happened on Earth.