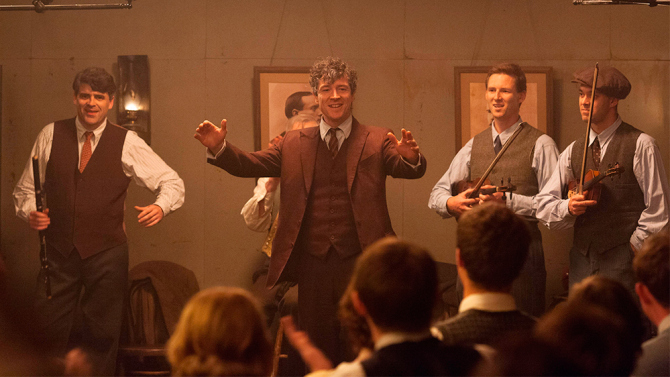 After years of exile in New York, Jimmy Gralton (Barry Ward) returns to his rural Irish village to find the life has been sucked out of the community, with the overbearing Catholic church keeping residents firmly under the thumb.

The village hall he built years earlier has long since been shut, leaving the locals nowhere to gather apart from the church.

On his return, he’s persuaded to reopen the hall and invite friends and neighbours to take part in dances, poetry readings, art classes and the like.

But seeing someone else breeze into the diocese and start offering people an alternative to religious teaching, church officials – led by Father Sheridan (Jim Norton) are furious and start agitating against Jimmy and his hall.

Returning to Cannes with another real-life Irish story, set a decade or so after his Palme d’Or winning The Wind that Shakes the Barley, Ken Loach wanted to follow-up to see how the people were coping in their newly independent country.

As is typical of Loach, this film is on the side of the working class people, giving them room to breath, pontificate and generally enjoy life in the way that few other directors – or indeed communities – allow. Loach himself notes that too often, working people make it onto the big screen only as victims or criminals, so Jimmy Gralton and his hall offer the characters something that their world and the authorities that run it don’t.

Loach is known for his social realism more than for his real-life stories, and he and writer Paul Laverty tweak Jimmy’s story in order to better present their view of society at the time against the backdrop of a more thought-provoking drama.

Narrow-minded and bitter as the priests seem in this film, Loach and Laverty insist that they gave them more depth to give them a sophistication that was lacking in 1930s Ireland.

While it’s often commented that the pair infuse their story-telling with so much politics, it can feel more like a lecture or a rallying call than a piece of entertainment, by setting up historical church leaders in another country as the antagonists, it enables the audience to sit back and get involved in the story, because there’s nothing we can do about this now. There’s no point getting angry, other than better to enjoy the drama.

While there are some interesting insights, there’s less relevance to the modern day than much of Loach’s work; if Jimmy were alive today, Loach believes, he would have been fighting corporate greed – but short of highlighting the fact that people will always find something to moan about, it’s not clear how useful it is to equate the Catholic Church with twenty-first century big business.

A cast of largely unknown actors present a warm and uplifting tale of everyday people just wanting to experience the beautiful and emotionally enriching things in life as the local authorities almost inexplicably try to stop them and throw them back into the dark ages. But the idea of the powerful church trying to clamp down on the evils of dancing, jazz, poetry and painting feels oddly parochial and distant, however true it is, making the premise feel darkly comic in a way that challenges the drama.

Jimmy’s Hall feels visually authentic and as emotionally enriching as the life it offers its characters while it can, but there are times where it feels a little heavy, as if Loach’s message of “small man good, authorities bad” is tattooed on the forehead of everyone on screen.

The social context of the film is built around the personal story of Jimmy and the woman he left behind when he last fled, Oonagh (Simone Kirby), who has since married and had children – although the pair have lost none of their feelings for each other. On one level, seeing the pair reconnect adds effectively to the personal drama, but on another, it feels like a cynical way to use emotions to draw stragglers towards the politics.

Ultimately, Loach has a somewhat pessimistic outlook – if everything worked out in the 1930s, he wouldn’t still be moaning about it now – so you’re likely to leave with a bit of a sour taste in your mouth, but the narrative is passionate and while it has less relevance to the twenty first century than many of his films, Jimmy’s Hall can be enjoyed as an accessible, romantic drama.