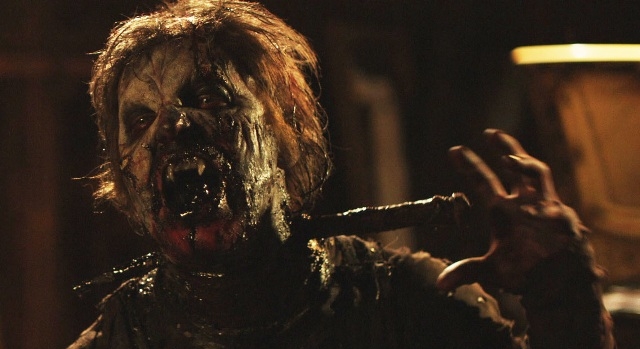 In a post-apocalyptic United States, where vampires roam free, teenaged Martin (Conner Paolo) hooks up with vampire-hunter Mister (Nick Damici), who promises to get him to the safety of the vampire-free New Eden, Canada.
They encounter a handful of survivors, including a marauding gang of extremist Christians, called the Brethren, a nun who’s just been raped (Kelly McGillis) and a pregnant barmaid (Danielle Harris), who clearly forms a bond with Martin.
Along the way, Mister teaches Martin the skills he needs to protect himself from the vampires who lurk around every corner, waiting for a human for dinner – or a bullet in the head.

With blood-sucking and flesh-chewing vampires and zombies making it to as many small screens as big screens these days, it’s even harder than it once was to come up with something original.
There is almost nothing original about Stake Land – a small group of humans trying to negotiate fearsome, inhuman beasts to make it to safety; most recently seen in TV’s The Walking Dead and the low-budget British movie-hit, Monsters.
Another element of the film that has also been done before is the fact that many of the surviving humans – whether through protectionism or insanity – pose more of a danger to our heroes than the vampires themselves do.
But although we’ve seen it all before – from the over-arching storyline and the character stereotypes to the themes of honour, survival, road movies – it bears repeating, because it takes the best bits of all we’ve seen before and recycles them effectively.
Like Monsters, Stake Land’s evidently low budget brings an added sense of reality to the proceedings and the vampires feel more like grimy, haggard old zombies than the shiny folk of Twilight or True Blood.
Because so many of the themes, characters and plot points are familiar, there are very few surprises, but the production design and fight choreography are impressive and the dirty blood spattering and snivelling religious warriors provide added bite.
It’s nice to see old timer Kelly McGillis is still working, but she has relatively little to do and consequently serves largely to make anyone who remembers her from Witness or Top Gun feel old.
The film-makers do a good job with little money and are sure to turn a profit in a way that low-budget horrors frequently do, but the difficulty is that for fans of the genre, the most fun will probably come from playing “spot the reference” – although addicts often can’t get enough – while people unfamiliar with the horror world probably wouldn’t be watching it in the first place.
It’s not a bad introduction to the world of post-apocalyptic horror though.