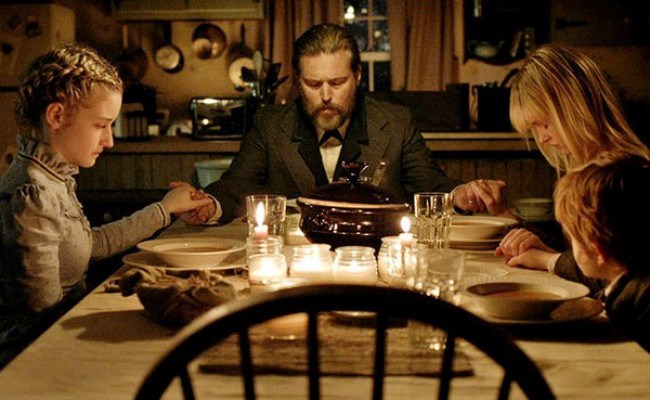 Small town America. A heavy storm. A clearly disturbed Emma Parker collapses and dies during a visit to the local grocer.

At home, a sprawling rural plot with a workshop in the garden and a single neighbour for miles around, her deeply religious husband Frank (Bill Sage) mourns her loss stoically, with their teenaged daughters Iris (Ambyr Childers) and Rose (Julia Garner) and young son Rory (Jack Gore).

When the local doctor, Doc Barrow (Michael Parks), is carrying out the post mortem examination on Emma, he discovers signs that make him suspicious about her lifestyle.

Her death is a rare piece of news in an otherwise quiet town, plagued only by the spectre of a number of young women going missing over the past few years – including, many years earlier, Doc Barrow’s own daughter.

While out walking his dog one day, the Doc finds a bone in a creek that he believes could be human and tries to get the local police to look into it.

The investigation soon homes in on the Parkers’ house, where the surviving family members are preparing for an annual ritual that the girls are finding it increasingly difficult to go through with.

This is an English language adaptation of the 2010 Mexican chiller – very much an adaptation, rather than a remake. In the original, it was the father who died, rather than the mother, but in both, the burden of preparing the disturbing ritual lands in the laps of the teenagers.

Although the story centres on the Parker family, it’s Doc Barrow who leads the audience on the journey through the dark side of the town, as he gradually unpicks the mysteries that have cloaked the region for decades.

The film balances along a fine line between horror and drama, being very much about how a family struggles to return normality – or their peculiarly horrific brand of it – after suffering an unexpected bereavement. But in the background is the doctor’s shocking discoveries about Emma’s eating habits and the disappearance of local women.

A slowly unfolding narrative weighs heavily on the viewer, as if you’re dragging your feed through the mud resulting from the heavy rain, but the slow pace adds to the effectiveness of the unraveling of the dark truth about the Parkers.

The methodical evil of Bill Sage’s patriarch perfectly balances the saintly qualities of Michael Park’s Doc Barrow and the slow determination of Ambyr Childers and Julia Garner to break free from the family curse is palpable.

Kelly McGillis also puts in a welcome turn as the kindly neighbour who gets caught up in the inevitable carnage.

The brooding sense of forboding that surrounds the Parkers is neatly handled but attempts to add enough of a back story to try to explain the family’s behaviour are an unnecessary obstruction to the narrative.

Overall, it’s a worthwhile rethinking of the Mexican original that justifies having a second pop at the story, in a different language.