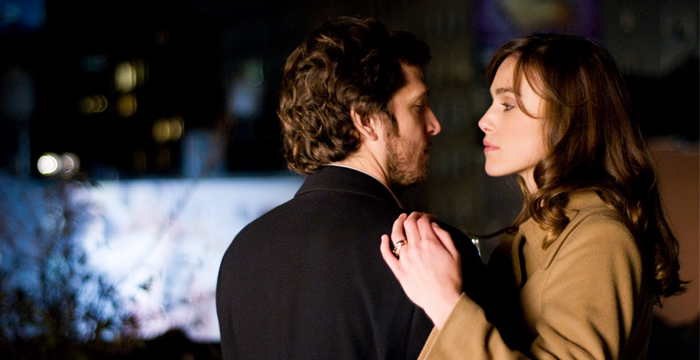 Struggling British writer Jo (Keira Knightley) lives with her Australian architect husband Michael (Sam Worthington) in Manhattan.
To the outside world, the relationship looks perfect – but a seething insecurity and jealousy within Jo means that when she meets Michael’s new colleague Laura (Eva Mendes) at a work do, she confronts him and accuses him of being attracted to her. It’s Eva Mendes, everyone; who wouldn’t find her attractive?! In Jo’s world, her husband should be allowed to work with women only if they’re ugly.
They don’t have a chance to make up, before the following morning, when Michael has to leave for an overnight, out-of-town business-trip, with a group of colleagues – yes, including Laura.
As luck would have it, later that day, Jo bumps into an old flame, the smooth-talking Frenchman Alex (Guillaume Canet), who is looking for a way to fill his last night in New York.
Michael’s away with Laura, she thinks, so why shouldn’t she spend the evening with Alex?

At its heart, this film presents us with a quandary far too dangerous to discuss at a couples’ dinner party, but fascinating fodder for a group of singles or platonic friends; what’s worse – physical infidelity or emotional infidelity?
Ask most people before they’ve seen this film, and they might say the most important thing is to keep your hands off their other half – and seeing the combination of alcohol and a powerful seductress will only strengthen that view.
But when the other side of the coin involves a reconnection with a true soul-mate whose misfortune it was to meet his true love after she’d already committed to someone else, you can understand that perhaps the “it meant nothing” refrain, employed by philandering husbands the world over, might actually warrant more credibility than it’s given.
Maybe his unplanned and meaningless physical fling is not as fatal to a relationship as the loss of her heart to another.
Before you feel I am arguing too passionately, I stress that this is a purely theoretical discussion, but it’s a fertile debate that has surprisingly not been often visited on the big screen. And I suppose you have to wonder whether writer/director Massy Tadjedin might be recalling some personal feelings as she brings this story to the big screen in her directorial debut.
While the quandary at its heart is fascinating and the cinematography and production design conjure up the right mood at every turn, the delivery of the story is somewhat less skilled and subtle than its subject matter might deserve. It’s by turns clunky, obvious and formulaic.
Sam Worthington’s character feels a little too flat and lacking in emotion, even if the idea is to contrast the physical side of his fling with the emotional side of Keira Knightley’s. She is convincing enough as an insecure and needy wife, but she fits the character profile so closely and extremely that it’s sometimes hard to identify with her plight – it almost makes the stunning actress appear unattractive to all but the most shallow of men.
Eva Mendes is a bit of a one-trick pony, who follows the exact path that is required of her piece of the jigsaw puzzle. Guillaume Canet, though, gives perhaps the most skilful performance, as his charming platonic friend morphs imperceptibly and deceptively into a Lothario, slowly reeling in his prey.
The editing is unconventional, but not in a logical or effective way – Godard-style jump cuts and a fractured time-line, intercutting the party scene and the drive home, only detract from the world we’re asked to inhabit. It makes you feel that that the director is trying show off – but it’s not clear what she’s trying to show off.
Ultimately, your enjoyment of the film as a narrative will depend on how much you can suspend your disbelief about the only man Jo has ever truly loved just happening to bump into her on his one night in Manhattan – the very night that the husband she fears is being unfaithful is out of town with the woman she accused him of wanting only last night.
You’ll be thinking, or even talking about Last Night long after the morning after the night before, but you’ll most likely be thinking and talking about the question at its heart, rather than the dramatic way that it’s explored on screen.