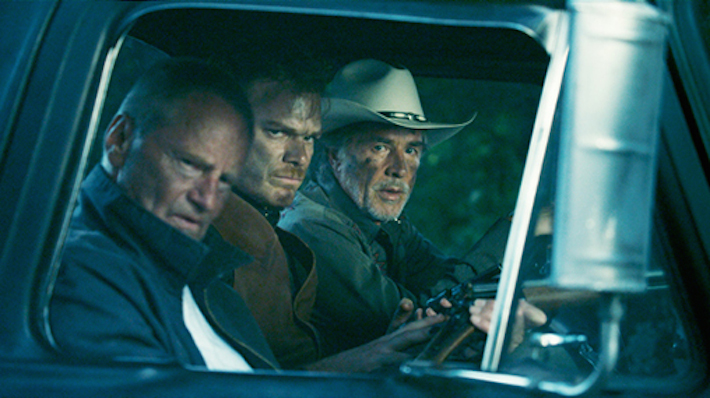 Unassuming family man Richard (Michael C Hall) is woken in the night by a noise in his house. He grabs a gun and nervously heads downstairs to confront the intruder. In a blind panic, he pulls the trigger and the man is instantly killed.

While his neighbours congratulate him on his heroism, Richard is haunted by what he’s done, something made worse by regular, threatening visits from his victim’s creepy father, Russel (Sam Shepard).

But Richard soon becomes suspicious that the man he killed isn’t who the authorities are claiming and with the help of a flamboyant local private eye (Don Johnson), he and Russel set out to get to the bottom of who’s hiding what and why.

The team behind Stake Land and We Are What We Are, director Jim Mickle and writer Nick Damici, reunite for a 1980s set small-town B-Movie thriller that is heavy on atmosphere and plot but light on coherence.

What starts as a dark and thought-provoking drama, morphs via an intense reverse revenge thriller to a conspiracy thriller that touches on violent pornographers, which can’t decide whether it’s a chiller or a dark comedy.

Each of these films works to a degree, but they don’t sit particularly comfortably together, giving the impression that Mickle and Damici aren’t quite sure which story they want to tell and how. At times you might wish they’d have the courage of their convictions and stick with one story, but instead it feels somewhat disjointed.

Michael C Hall is effective as the everyman at the film’s core, Sam Shepard is suitably creepy as the vengeful father and Don Johnson is a delightfully surreal confection of flamboyant violence.

The film is constantly engaging and wrong-foots the audience as the plot flips from one film to the next, but by the time it reaches its denouement, it feels like the narrative has spun so far from its original premise that it feels like a gratuitous blood-fest that, while entertaining in its own right, fails to satisfy initial expectations.