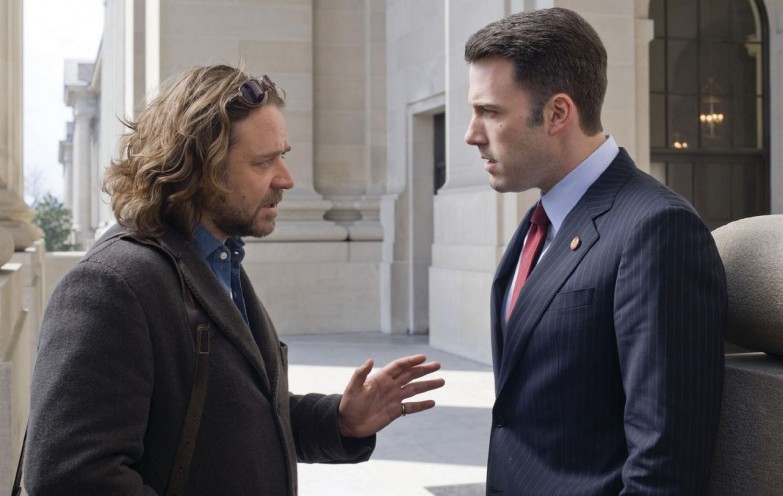 Cal (Russell Crowe) is about as old-fashioned as reporters could be – driving around in his cluttered car, clutching his spiral-bound notepad as he sweet-talks police to get the story.

The story he’s been given this time – by Washington Globe editor Cameron (Helen Mirren) – is a brutal, gangland double murder.

The rising star at the paper is cub reporter Della (Rachel McAdams), who’s usually just given the celebrity blogs to write, but she sees her big break when she’s assigned the mysterious death of a Congressional aide. What makes this case particularly intriguing is that the assistant – a chief researcher for a committee chaired by Representative Stephen Collins (Ben Affleck) – is rumoured to be having an affair with the married congressman.

To tie the two stories – and the two mismatched reporters – together, Stephen turns out to be a school-mate of Cal’s – and to lay the foundations of a intricately woven web of lies, deceit and intrigue, Cal’s also had an affair with Stephen’s wife (Robin Wright Penn).

How did the assistant die? Who ordered it? Is there a cover up? Who’s behind it? Who stands to gain from bringing the congressman down? Could it have anything to do with the major arms company that’s being investigated by the congressman’s committee?

Squeezing six hours of a BBC TV mini-series into a two hour Hollywood movie, transferring the action from Westminster to Washington, was never going to be an easy task.

But even fans of the 2003 show generally seem to approve of its journey across the Atlantic, from the small screen to the big one.

In its own right, it’s an effective, taut thriller, which – surprisingly, in the circumstances – doesn’t feel like it’s had four hours of material chopped out. So that’s a few gold stars to the writers – including Bourne series writer Tony Gilroy.

British director Kevin Macdonald handles the camera and the performances with aplomb – from the fast-paced action sequences to the slow-burning intrigue, as the facts emerge like numbers on a scratch-card – all the while, capturing the tension in the relationships, whether he’s pitting a cantankerous old-time reporter against a fresh upstart, the reporters against their typically demanding editor (Helen Mirren), the journalists against the police, or all of the aforementioned against the protagonists in the brewing political scandal.

Some of the twists and turns and plot-points, though, seem a little forced or obvious – the characters often seem too neatly pigeonholed into stereotypes, few of which are undermined, giving little room for them to develop.

And as the denouement draws closer, they don’t quite know when to stop the twists and turns – pushing it just a little too far, until a finely plotted piece of work delves just a little too deeply into the world of fantasy.

This is perhaps where some of those extra four hours have gone astray – but if you go along with it and just assume “I’m sure they’d have been able to sort that out, with a bit more time,” this film is a rewarding watch.

It’s not up with All the Presidents’ Men and the original Manchurian Candidate, but it’s a worthy addition to the catalogue of political thrillers.