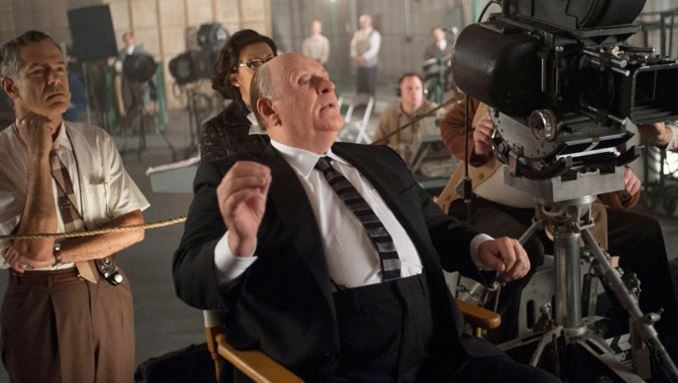 After the critical acclaim heaped on North By Northwest on its release in 1959, Alfred Hitchcock’s (Anthony Hopkins) career was at a cross-roads. Bereft of inspiration for his next film and with critics calling for him to quit while he was ahead, he was determined to find something to prove he was still the master of suspense.

When he stumbled across the horror novel Psycho, he was so excited, he got his assistants to buy up every copy in the country, so that if he made the film, no-one would know what happened.

At the time, he had a contract with Paramount, but they refused to back such a controversial project and the censors threatened to block its release, but determined to make the film, Hitchcock mortgaged his house to raise the money to finance it himself.

This biopic covers the making of the film whose name is most synonymous with his own, influencing dozens of horrors and thrillers that followed.

But most significantly, it illustrates the key role played by his wife, Alma Reville (Helen Mirren), both professionally and personally, in making the film – and making the man.

As is often the case, films come along in twos – Volcano and Dante’s Peak in 1997, Armageddon and Deep Impact in 1998 – a few years later, two actors got the chance to play Truman Capote just a few months apart, one of them being Toby Jones – who’s just been seen on TV playing Alfred Hitchcock, in the feature length The Girl, about the making of The Birds and Marnie.

Jones’s film painted the director as a bully who used sexual harrassment to control his young starlet Tippi Hedren, before stopping her working for anyone else when she rejected his advances. With Psycho coming immediately before The Birds, this film, immediately precedes those events and presents a not altogether different picture of Hitchcock, but certainly a more sympathetic one.

There are similarities – in both, he’s an insecure bully, infatuated by his leading ladies. But while The Girl suggests he was a chauvinistic predator who refused to accept no for an answer, the eponymous theatrical film paints him as a man who admires his actresses – whether watching them undress through peep-holes or enjoying flicking through their headshots – but is so dependent on his wife that the thought of giving her up for a fling with a young blonde wouldn’t even enter his mind.

The Girl suggests that he bullied Tippi Hedren because she wouldn’t let him kiss her, but according to the Hitchcock narrative, he bullied his actresses to get the best performances from them; if they were truly scared, they would look truly scared – something that could equally apply in the case of Tippi Hedren’s naive young model, acting for the first time, for one of the world’s most respected directors.

But while there’s been much debate about the diverse – although comparable – portrayals of the rotund director with his iconic side profile, brought to the screen by two strong actors – and equally strong make-up and costume departments, we’re not discussing reality, we’re discussing a film.

In that sense, Hitchcock is as beautifully shot as you’d expect for a film about film-making, and – its protagonist aside – full of beautiful people. It’s perhaps surprising which way round the awards glory has fallen, with Helen Mirren up for awards including the BAFTA and Oscar, while Anthony Hopkins has missed out; there’s nothing wrong with Dame Helen‘s performance, although there’s little spectacular about it, apart from one scene in which she points out to Hitch how much he depends on her – but Sir Anthony’s is the more interesting turn – rather than simply impersonating one of the best-known figures in film history, he hints at what we know, but shows us something new – the insecurity, the short temper, the need for control, the tactics for eliciting magic from his cast, even the humility.

OK, so there might be a bit of Hollywood character-arc going on, but it makes for a satisfying narrative and framing the film within scenes reminiscent of his Alfred Hitchcock Presents… TV show, by addressing the audience directly, we get a sense of his cheeky sense of humour and his source of inspiration.

There are rather too many flights of fancy into the world of the real-life serial killer Ed Gein, who inspired Psycho, and the side story of Alma’s friendship with a talentless hanger-on (Danny Huston) doesn’t feel convincing, although it pays off effectively.

Unusually for a film bearing his name, there’s no suspense – most of us know how Psycho turned out anyway – the narrative is a little arch and it’s not the most profound of biopics, centring as it does on such a brief period of his life, but as a study of marriage and the tale of an artist determined to show his creative mettle against the odds, Hitchcock is interesting, effective and entertaining.

With the film-makers unable to show footage from Psycho, the most memorable scene takes place during the film’s low key world premiere, as we see Hitchcock dancing around the cinema lobby, conducting the screams from the audience during the shower scene. More than any effort to impersonate Hitchcock, this triumphant celebration of the director’s success is a scene that could have been shown at awards ceremonies, had Sir Anthony secured any nominations. Knowing how much Hollywood likes biopics and films about its own, his failure to do so is perhaps the biggest shock of the production.