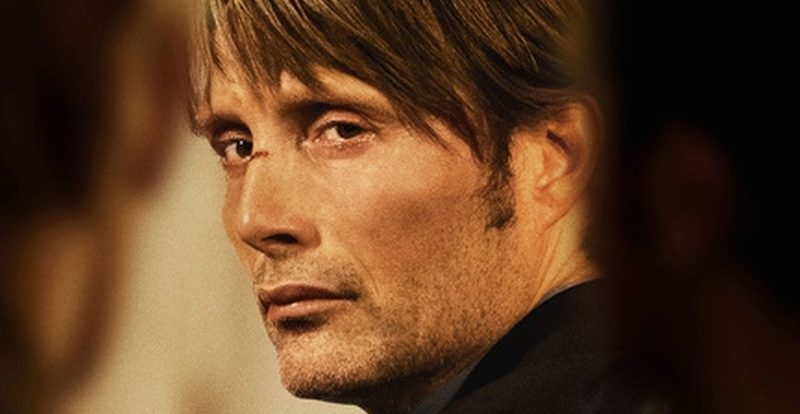 In a sleepy Danish town, Lucas (Mads Mikkelsen) is a popular nursery school teacher. He’s living alone after his marriage broke down, but his teenaged son Magnus (Lasse Fogelstrøm) is keen to move in with him.

His best friend Theo (Thomas Bo Larsen) has a tempestuous marriage and his young daughter Klara (Annika Wedderkopp) seeks refuge from the arguments in the garden, where Lucas will find her, comfort her and often walk her to school.

While playing with a group of children one at school one day, Lucas plays dead. Klara panics and when he jumps up, she’s so relieved that she kisses him on the lips. “You can’t do that,” he insists, reassuringly.

Klara feels hurt and rejected by her favourite teacher and when the head of the school asks her what’s wrong, in youthful naivety, she makes up a story about him showing her his private parts – not actually having any idea what private parts are.

But children don’t lie, do they? Lucas is suspended, an investigation is launched, more allegations involving other children come out of the woodwork, his new girlfriend leaves him, Lucas is shunned by the whole community – and when Klara begins to realise that she should perhaps not have made up the story, the supportive adults reassure her that the abuse did happen and she’s just blocking it out because it’s so traumatic.

A respected teacher’s life – and career – are destroyed by a false allegation of child sexual abuse, leaving the whole community wondering whether there can really be any smoke without fire.

Coming just weeks after the Savile and McAlpine scandals gives an otherwise powerful drama all the more topical potency.

Thomas Vinterberg, who previously explored the other side of child abuse in his calling-card Dogme 95 film Festen, delivers a tautly unfolding plot, presenting a caring, exemplary teacher and showing how the lynchmobs can collect and gather momentum based on nothing.

It’s shocking to see how a good man can be destroyed – both figuratively and physically, as he struggles to maintain his reputation and his dignity against a torrent of unfounded allegations, based on ignorance and malice, but certainly no facts.

This is, of course, not to take anything away from the severity of well-founded complaints, but it is the case that not every allegations is true and the western world supposedly follows the “innocent until proven guilty” maxim for a reason – or at least the legal systems do, if schools, parents and the rest of society seem not to.

Mads Mikkelsen deservedly won the Best Actor prize at Cannes and his relationship with his best friend develops and unravels compellingly.

Counterintuitively, Annika Wedderkopp gives an astonishingly mature performance as young Klara, perhaps more by luck than judgement, as a girl of her age can’t possibly understand the complexity of the story she is pushing forward.

The simplicity of the plot, the inevitability of the drama and shocking response from ordinary people makes for a powerful drama that would be strong in any circumstances, but against the backdrop of recent news stories, it’s all the more chilling.