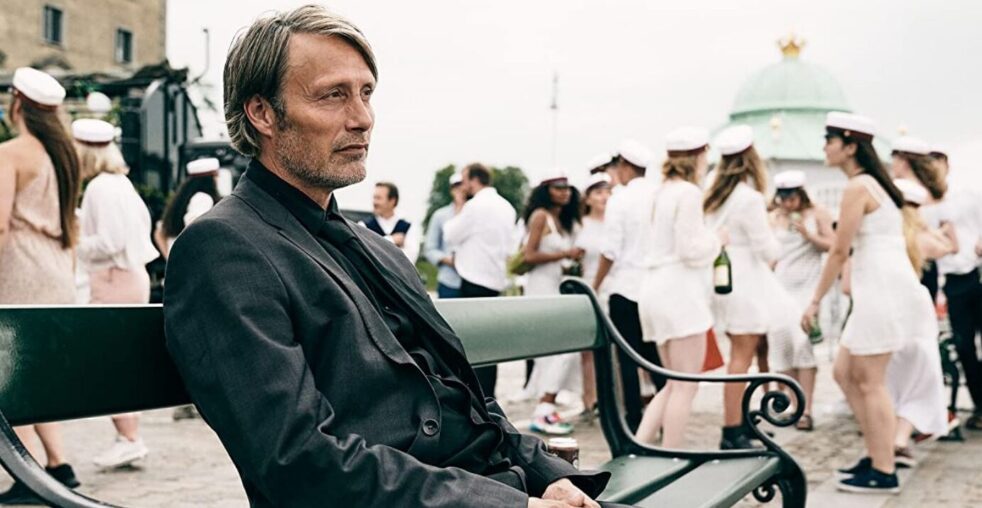 Martin (Mads Mikkelsen) is a secondary school history teacher. He has flashes of his former inspirational qualities, but depression has flattened him.

But when they discover a philosopher’s claim that humans don’t have enough alcohol in their blood, life begins to pick up.

They decide to experiment, testing their alcohol levels as they drink more and more, with breakfast, lunch and dinner – and in between – to keep up the level of alcohol in their system. And they find their spirits rise, their performances improve and life is generally better. Even their partners notice the improvement – but don’t know why.

But as they push the boundaries further and further, their secret looks like it will come out and some cope with higher levels of alcohol in their system than others.

Ever since Thomas Vinterberg arrived on the scene with his Dogme film Festen – or The Celebration – he’s been a fascinating film-maker, always with something interesting to say.

In one of his strongest films, The Hunt, Mads Mikkelsen played a primary school teacher, accused of sexually abusing a child. That was a powerful tale, heavy with drama. The pair are reunited here, with another evocative performance from Mikkelsen, again portraying a teacher on the fringes of society.

To the four central characters, experimenting with maintaining a level of alcohol in your blood stream during classes makes perfect sense – but to anyone else who found out about it, their jobs and their reputations would be on the line.

It perhaps won’t come as too much of a surprise that it seems that a mid-life crisis can be eased with a secret sip of booze, here and there, but it’s similarly unsurprising that when the alcohol levels start to rise, any benefits are outweighed by the downsides – damaged relationships, wetting yourself, the consequences of addiction.

The story arc is well handled – as hopefulness gives way to hopelessness – although the inevitable way in which the narrative unfolds isn’t particularly surprising. Some handle the experiment better than others – some are lifted, others collapse. But that’s real life – alcohol affects different people in different ways. Individuals just need to know when to stop – and shouldn’t let others influence their decisions.

The characters acknowledge and discuss this, even factoring it into their decision to persist with the experiment even when it no longer seems like such a good idea.

The messages – that alcohol can be dangerous and that you don’t need to drink to be a better person – are certainly as helpful as they are uncontroversial, although they’re similarly obvious and not as profound as the film-makers seem to feel.

We don’t need to spend time with these teachers to learn about the perils of alcohol abuse – but spending any time in the company of Mads Mikkelsen will always be rewarding as he adds complexity to what, on the surface, seems a simple lesson.