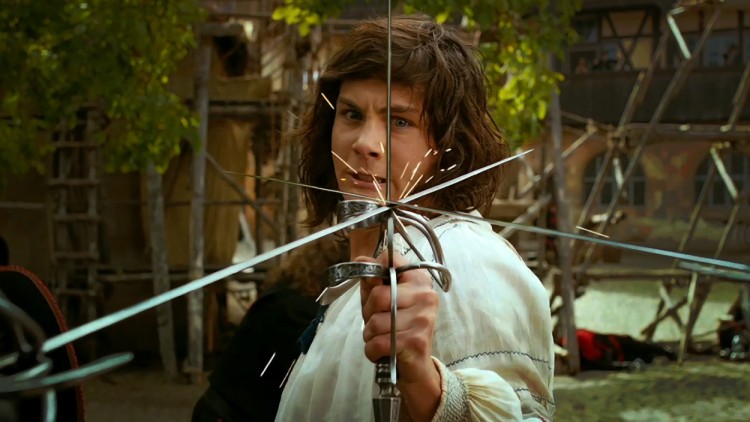 Young country boy D’Artagnan (Logan Lerman) decides to head to Paris to follow in his father’s footsteps and fulfil his dream of becoming a musketeer in the court of King Louis (Freddie Fox).

He arrives in the big city as the three musketeers Athos (Matthew Macfadyen), Porthos (Ray Stevenson) and Aramis (Luke Evans) have just been dismissed from the court after failing in a mission for the King; they were betrayed by the wily Milady de Winter (Milla Jovovich), who took some documents she’d helped them steal and gave them to

Can D’Artagnan restore pride in the musketeers and help them defeat the full might of Richelieu’s forces to protect France from the conspiracy to topple the monarchy.

You hear the film title and you expect to see some swashes being buckled and that you do, aplenty.

But don’t spend too much time trying to work out the intricacies of the complex narrative – who’s plotting with whom to do what and how – it doesn’t help that the mishmash of accents and copious stage facial hair make it difficult to tell many of the protagonists apart.

Christoph Waltz relishes a return to the kind of evil genius that brought him to international attention in Inglourious Basterds, parading around in his robes like he owns the king and country.

It’s diverting – but very stupid. It’s full of thrilling fights and action sequences and as long as you don’t hold out for historical accuracy, there is fun to be had. But it’s not as much fun as it should because on the whole, it’s not played for laughs.

The Three Musketeers is oddly uneven in tone – it takes itself very seriously, yet it tries to inject some humour from time to time, largely through King Louis’ naivety or an oddly incongruous comic turn from James Corden as the musketeers’ lackey, Planchet. Humorous as it was, Corden’s comedy didn’t really fit any more comfortably in this seventeenth century swash-buckler than a battle between flying warships. Yes, flying warships.

Like in so many of this kind of film, the bad guys are far more interesting than our heroes – and D’Artagnan has almost nothing to recommend him but his boyish enthusiasm.

Almost from the first time we see him, we’d rather someone just stick this over-confident youth with their rapier and leave us with the three honourable heroes of the title to save the day.

And that’s just it. Three Musketeers. In 3D. That’s one D for each musketeer. Except that there are pretty much four of them for the duration of this film. And they mostly use swords, not muskets. The Four Swordsmen would’ve been a more appropriate title, but then there wouldn’t have been enough Ds to go around.