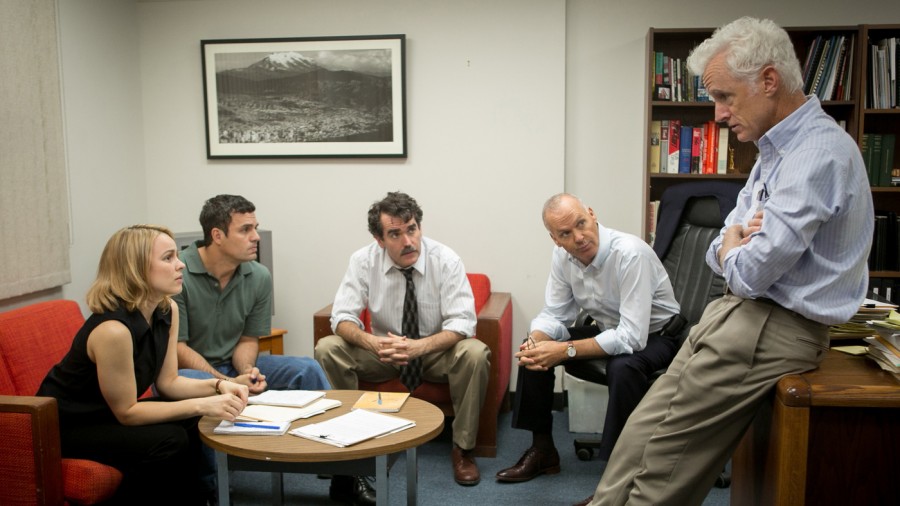 When Marty Baron (Liev Schreiber) takes over as editor of the Boston Globe newspaper, he wants to make an impact. He persuades – well, he’s the boss – he orders the newspaper’s “Spotlight” investigations team to follow up allegations that Catholic priests have routinely been abusing children and then, rather than being prosecuted or sacked, are just being moved to different areas.

These allegations have previously been dismissed as unreliable, but the team turns its attention to them afresh, with gusto.

Spotlight journalist Mike Rezendes (Mark Ruffalo) tries to secure the help of Mitchell Garabedian (Stanley Tucci), a protective lawyer who’s been dealing with people who say they were abused. Junior reporter Sacha Pfeiffer (Rachel McAdams) traces as many of the alleged victims as she can find and the team’s boss Walter Robinson (Michael Keaton) is chipping away at his golfing partner, who used to work as a lawyer for the church.

The closer they get to the truth, the more doors seem to be slammed shut in their faces and as the Church realises that the Spotlight team is going straight to the top, its representatives start tightening the pressure on the paper to try to keep it quiet.

But the team is determined to expose the scandal and see that justice is done for the many victims of abuse and the Church’s subsequent cover-up.

These days, the idea of paedophile priests doesn’t seem too unusual, but back at the turn of the century, Catholic priests were regarded by many – from abuse victims to journalists, particularly in the largely Irish-descendant community of Boston – as just one step away from God – surely they couldn’t do wrong – if they did something, it must have been OK, right?

But the arrival of fresh blood at the Boston Globe, who’d read something in the newspaper’s gossip column, turned historic allegations that had long since been discredited into a new, active investigation. The editor Marty Baron was prepared to go to court to challenge the Church’s attempts to keep certain claims quiet and his determined journalists did the rest.

As a journalist, I always approach films about my craft with anxious anticipation.  Sometimes, directors get it right – such as the classic All The President’s Men – but other screen journalists are somewhat less convincing.

But casting the spotlight on a real-life scandal is clearly a good place to start and Tom McCarthy’s snappy Oscar-nominated screenplay (co-written with Josh Singer) neatly and convincingly unfurls a complex web of conflicting motives, as a team of experienced journalists and editors spread their talons, digging deeper into cardboard boxes full of archive newspaper cuttings – and the leads that spring from them.

There’s a believable balance of finding leads and confirming them with those involved and chasing the people at the heart of the story to fish for the information that they need. And when they believe they have a story they can corroborate, Michael Keaton’s Robinson decides to wait before telling even his own boss, because he doesn’t want to stop until he can prove that the cover-up goes right to the top.

But while there was clearly a huge conspiracy, whose victims were silenced, this doesn’t have the sense of threat presented in All the President’s Men – and there’s a sense that most of the information required to uncover the story was actually available some years before this story even begins and it’s never quite clear why it wasn’t used at the time. Tucci’s lawyer also seems to be playing a rather strange game – would he really have made the journalists jump through so many hoops if he had information he wanted to get into the public domain? That said, it does feel a bit odd when you pick holes in real-life stories. It could be that the film-makers dropped the ball from time to time, but it could also just be that real-life can be even more odd than the story might require.

There’s no question that there are some tremendous performances with the bristling, yet slow-burning script and with similar scandals still being investigated to this day, among institutions across the world, even in the UK, the subject matter is still potent.

But while it’s always a pleasure to listen to the actors as they draw closer to their goal, the cinematography feels more like it belongs on the small screen. The screenplay might even have better fitted a stage. Under a spotlight, perhaps.