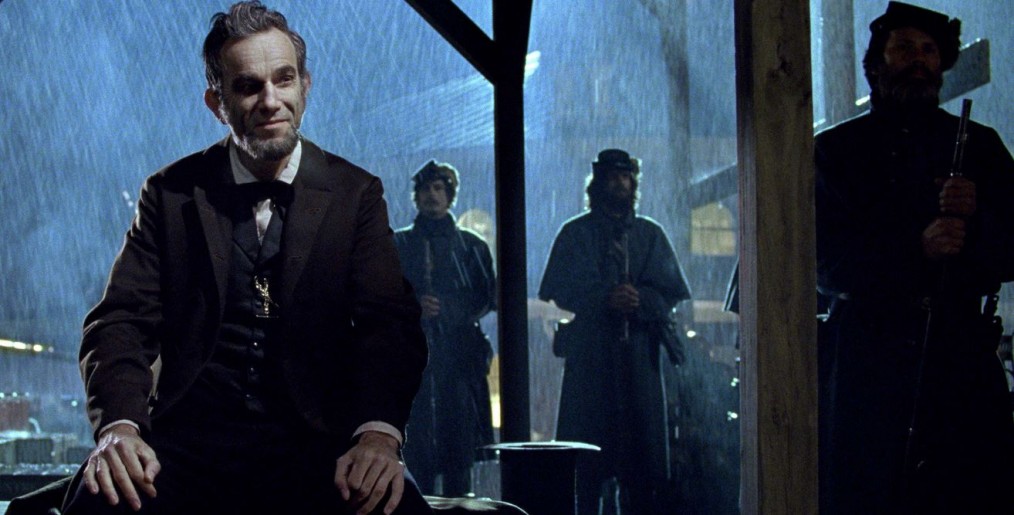 Abraham Lincoln (Daniel Day-Lewis) has just won re-election as the United States is involved in a bitter civil war – partly over whether or not to abolish slavery.

In Washington, Lincoln’s Republicans are more inclined to back equality and largely support an amendment to the constitution that would outlaw slavery. But the less progressive Democrats – yes, Barack Obama’s party – are particularly worried that emancipation could end up leading to black people getting the vote, which would never do. So, backed by southern farmers, who rely on slavery to keep their cotton businesses thriving, they oppose any change.

Lincoln is convinced that the promise of peace could be enough to persuade Congress to back the amendment quickly, possibly even before his inauguration just three weeks away. He’s also well aware that if the war were to end before the amendment is passed, it would be harder to rally support to end slavery.

When officials from the southern states offer a truce, Lincoln puts lives at risk on both sides by prolonging the war, to ensure that he can win the war of words to consign slavery to history.

Although the subject is dear to Steven Spielberg‘s heart – he previously touched on slavery in Amistad – and he’s certainly in with a good chance of the Best Director Oscar, in the absence of Ben Affleck and Kathryn Bigelow, this is not a film that shows off Spielberg‘s skills; put actors as good as his in costumes and sets as authentic as these, give them a script as mellifluous as Tony Kushner’s and get a cinematographer as artistic as Janusz Kaminski to film them and you really can’t go wrong.

Lincoln is not a film about war or slavery. It’s about politics and leadership. Delivering parables like some kind of 19th Century Messiah, he carries out the political feat of his time, getting his verbal henchmen (John Hawkes, Tim Blake Nelson and an almost unrecognisable James Spader) to work on Democratic party waverers to get beat them to the point of submission with words and political bribery.

This is, of course, Spielberg and Kushner’s version of history rather than history itself, but even here, Lincoln is not painted as a saint – he’s fighting as much for his political reputation as he is for the rights of black people. It’s the radical Republican Thaddeus Stephens (Tommy Lee Jones) for whom personal principles play the biggest part.

Between Tommy Lee Jones’ barn-storming performance, demolishing his rivals across the floor with the most potently barbed insults, and London-born Daniel Day-Lewis‘s much-heralded depiction of one of America’s favourite sons, as a quietly-spoken, story-teller who can win over almost everyone but his put-upon wife (Sally Field), the acting is astonishing. It’s impossible to say how accurate either man’s portrayal is, but despite many screen adaptations of the period, these are likely to be the definitive characters for generations to come.

With nearly a hundred and fifty speaking parts, there’s a wealth of supporting talent further down the cast list, with the likes of David Strathairn, John Hawkes, James Spader, Jared Harris and the octogenarian Hal Holbrook all deserving honourable mentions.

Coming just a few weeks after Quentin Tarantino‘s take on the same period of American history, as Jamie Foxx and Christoph Waltz dispensed with slavery in their own way in Django Unchained, the two films could not be more different – one using bullets while the other uses barbed – and poetic – words to the same end.

But beautifully written as Lincoln is, and bursting with admirable acting, the narrative is complex and not entirely convincing and there does come a point where viewers will identify with Lincoln’s war secretary when he bemoans that he can’t take any more of his stories.

This is a film not about Abraham Lincoln, but how the president skilfully passed an amendment to the constitution that made America a country that could preach freedom to the world – so it’s a shame that Spielberg felt unable to make a film about Lincoln that did not show us the assassination. A film about the passing of an amendment should have – or at least could have – ended with the passing of the amendment. We know he was assassinated, Steven. We don’t need to see it. His death did not belong in this film.

It’s perverse that however likely he is to pick up a third directing Oscar, Spielberg himself is perhaps responsible for the few failings of this otherwise powerful film, although as the director, he’s allowed to accept the deserved praise due to all of those working beneath him.