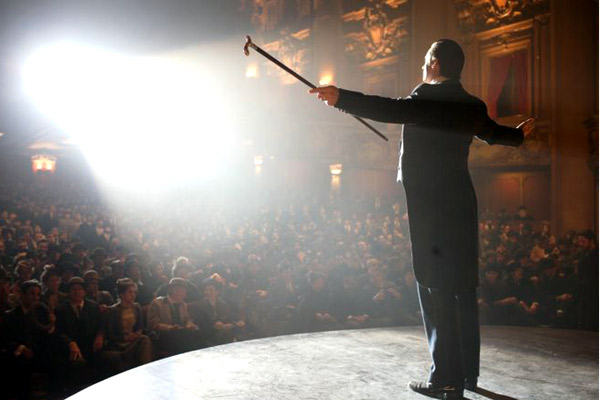 Based on Christopher Priest’s novel, The Prestige is the story of two rival magicians in Victorian London, who try to outdo and outwit each other in an escalating battle of tricks leading to a deadly climax.
The two men’s obsession to uncover the other’s trade secrets spirals out of control.

Directed by the ingenious and acclaimed film maker Christopher Nolan (Memento/Batman Begins) this whole film is an illusion.
Like a magic trick it consists of three acts – The Pledge: where the magician shows you something ordinary; The Turn: where the magician makes this something ordinary do something extraordinary; and the final act known as The Prestige which is the part with the twists and turns where you see something shocking you’ve never seen before which will blow you away, such as seeing a bird or a man reappear.
The problem with this film is that it’s all smoke and mirrors. It lacks magic and the final act the Prestige itself will leave you confused rather than in awe.
It also tries to be too clever by half. I fear it will lose audiences half way through.
It’s not a movie that grips you emotionally either. Mid film I found myself feeling bored by the spiraling rivalry between Hugh Jackman and Christian Bale’s characters.
By the end, I didn’t really care about any of the characters bar Cutter, who designs the illusions, and played by Sir Michael Caine.
It’s a fabulous looking film and the star studded cast give impressive performances especially Caine who just gets better and better. It’s good to see David Bowie doing a turn and Andy Serkis playing a human part for once. Scarlett Johansson was rather wasted although male cinema goers might disagree when they see her in her tight fitting outfit.
Being a huge fan of Nolan and his film Memento I expected to be wowed and completely spellbound by The Prestige. I hoped Nolan could pull it off again but sadly I was disappointed on both counts.