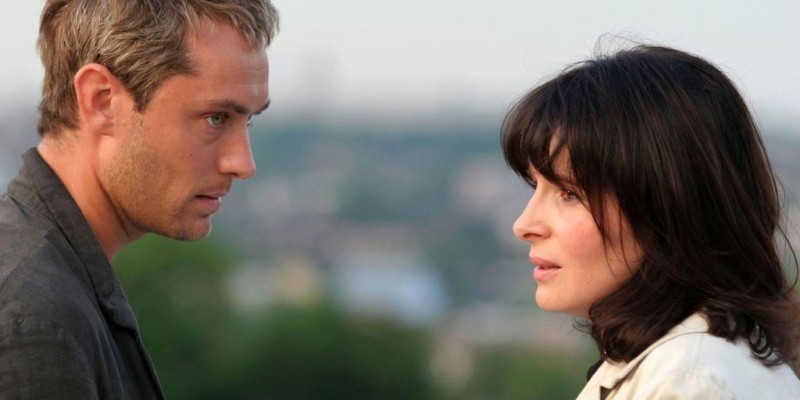 Will (Jude Law) and Sandy (Martin Freeman) are very excited about where their architecture firm is going – they’ve won a huge contract to regenerate the dilapidated Kings Cross area of London, and they’ve moved into snazzy new offices in the heart of the development.

It certainly takes Will’s mind of his slightly uncomfortable relationship with his cool wife Liv (Robin Wright Penn) and her autistic daughter.

He soon has something else to take his mind of his unsatisfactory home life – a series of mysterious break-ins at his new offices, in which thousands of pounds worth of computer equipment is stolen by a highly skilled gang.

When the police fail to make headway in their investigation, Will decides to mount a stake-out himself. One night, he foils another break-in and follows one of the burglars across the rooftops of central London to the flat he shares with his Bosnian immigrant mother Amira (Juliette Binoche).

Keeping his motives close to his chest, over the coming days Will works his way into Amira’s life, but soon, his motives change, as he realises that he’s more interested in pursuing her than he is in pursuing the burglars.

This multi-layered film gets a little confused – it’s not quite clear what it’s about.

It’s certainly about “breaking” – whether break-ins or break-ups – and “entering” – presumably the double-meaning here refers to the immigrants coming to Britain – but the attempts to blend the crime story with the social problems and the tale of marital infidelity are a little strained.

The different strands might work well as separate short stories, but they don’t hang comfortably together.

The key cast members are certainly convincing – it’s particularly welcome to see Jude Law turning in an above average performance – he’s so much better with his English accent than when he plays American, as in the recent All The King’s Men. But some of the supporting characters – Freeman’s cheeky-chappy business-partner, Sandy, and Ray Winstone’s detective – serve as little more than convenient plot devices, to add a dash of humour when required or to pull the film back to one of the other storylines, when it’s veered somewhat off-track.

The role of Sandy is particularly clumsy in this sense – he’s around at the beginning, to help us learn that Will is good natured and good humoured, disappears for most of the second act when the serious drama is unfolding and his levity would get in the way, and then reappears at the end, when Will has to face the consequences of his actions.

At times, the film is awfully twee – doing its bit for the London Tourist Board, whenever the King’s Cross-based characters want to get a bit of fresh air, they go for a walk atop Primrose Hill, through Camden Lock Market and along Hungerford Bridge – hardly the obvious choice for a quick stroll if you develop itchy feet in King’s Cross.

Alexandra Palace, nearly ten miles away, also gets paid a visit – apparently because if a police officer wants to give a burglary suspect a dressing down, he clearly needs a visually arresting background.

But however well the film works as a whole, many of its elements – whether it’s Law’s performance or the London vistas – work well on screen, so the film is by no means a dead loss. It’s quite enjoyable while you’re watching it, but it’s nothing like as deep and meaningful as it thinks it is, and doesn’t leave you feeling you’ve learnt anything about these characters or indeed humanity in general. Moreover, the characters don’t seem to have learnt much to improve their lives themselves, either.